Arnold Sturdy rode into Miami, NM, in 1912 on a little grey. Every time he told the story his left hand would go up instinctively to his waist, as if he were still holding the reins. Of a Saturday he and his buddy Kennedy would catch them a couple of green ‘uns, unbroken horses, hop on and ride them down to Levy, just north of Wagon Mound, to meet girls. By the time they got back to Miami the horses were pretty well reconciled to the saddle, nice as pie. Kennedy made a little change on the side by putting dimes under his boots in the stirrups when he rode out a green bronc. Silver dollars were better. Pay up if the dimes were still there when the horse had stopped bucking and whirling.

Back then, the range was still new to settlement and the only way to get around was horseback. It took a crack rider to master that kind of limitless country and the best ones were born to it, on a horse as soon as they could sit upright, and like as not spent the rest of their lives there out of preference.

The Spanish conquistadores were the forefathers of Western equipage. When they imported the first horses into the New World, they brought along all the gear and a few centuries of horsemanship, training and style.

The ownership of a horse and the ability to ride it symbolized wealth and honor. Spanish gentlemen were called caballeros, horsemen; it was a distinction of class jealously guarded. As were the horses themselves, once in the new land. The Spanish suspected that if any of the indigenous tribes became mounted, there would be no controlling them, and they were right. The horse fitted ideally with the roaming, predatory life of the Plains tribes and gave those who had them a tremendous advantage in the hunt and in warfare.

When the Spanish were driven temporarily out of New Mexico in the 1680 Pueblo rebellion, they lost their iron control of the herds. The Apaches were the first to get their hands on those horses separated or left behind in the confusion, and never turned back. Having learned from the Spanish themselves during their servitude as vaqueros how to care for horses, even break and train and breed them, the Apaches embraced the life fully. Bartering, stealing and breeding of horses became their way of life. The Comanches bragged they had more horses than there were stars in the sky. 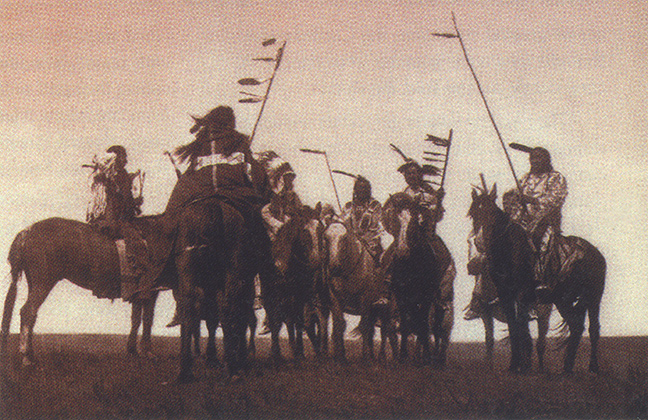 The Plains tribes were all consummate riders. They jettisoned the heavy Spanish gear of saddle and bridle and rode their mounts with only a horsehair halter and a blanket. More speed, more distance and the control of leg and spirit over harsh appliances. Just grab the mane and throw a leg over.

Liberating horses became both a sport and a proof of skill. Eventually the Spanish became so short of horses they had to import more from the south.

These riders that conquered the plains were the extreme athletes of a time that was physical to begin with, and had all the traits that you’d expect from any normal adrenalin junkie – raw nerve, a craving for adventure and a love of challenge.

And the speed. You could cross the lone prairie, the wide grasslands vast as an ocean and as much of a barrier, at the rate of 12 miles a day behind an ox cart or leap on the back of a four-footed tornado and get someplace in a hurry.

To carry that kind of speed the rider not only had to be in complete control of himself and his animal, but be able to meet any exigency the trail had to offer.

The Pony Express was a system for carrying the mail westward developed in 1860 by the freight company West, Russell, Majors and Waddell. It was the airmail of its time; the horses fairly flew across the prairie through all kinds of weather and incipient threats from the tribes. Buffalo Bill Cody, who started at the age of 14, had the record: 322 miles in 24 hours and 40 minutes using up 21 horses in the run.

Just the business of making a living in this wild, rugged country was a challenge that riders had to meet every day. The sport of kings was just bread and butter for New Mexico’s early buffalo hunters, called ciboleros.

“Every year,” writes Josiah Gregg in his classic 1864 Santa Fe Trail piece, Commerce on the Prairies, “large parties of New Mexicans, some provided with mules and asses, other with carretas or truckle-carts and oxen, drive out into these prairies to procure a supply of buffalo meat for their families. They hunt, like the wild Indians, chiefly on horseback, and with bow and arrow, or lance, with which they soon load their carts and mules… These hardy devotees of the chase usually wear leathern trousers and jackets, and flat straw hats; while, swung upon the shoulder of each hangs his carcage or quiver of bow and arrows. The long handle of their lance being set in a case, and suspended by the side with a strap from the pommel of the saddle, leaves the point waving high over the head, with a tassel of gay parti-colored stuffs dangling at the tip of the scabbard…”

Anybody who could close on a galloping buffalo and drop him with a spear from horseback had to be a pretty fair rider. They were trained by the terrain itself.

Ovando J. Hollister in his history of the First Colorado Volunteers called them “rollicking, tempestuous sons of the frontier,” given to hard drinking and fighting and extreme horsemanship. They turned the tide of battle in the Civil War engagement of Glorieta Pass in a cavalry charge across ground so broken the Confederates thought they were immune from danger. A confederate captive told the story.

“They had no sooner got within shooting distance of us, than up came a company of cavalry at full charge, with swords and revolvers drawn, looking like so many flying devils. On they came to what I supposed certain destruction, but nothing like lead or iron seemed to stop them, for we were pouring it into them from every side like hail in a storm… It looked as if their horses’ feet never touched the ground, until they were among us.” A deep arroyo separated the two forces. “We felt safe, but they turned their horses, jumped the ditch, and like demons came charging on us.”

That’s the kind of energy that went into the American cowboy. The cattle ranching business found a foothold in those days of wide lands and free pasture, but it took someone who could ride hard and handle the loneliness and physical demands of a life under the sky to make it work.

“Buckaroo” is a corruption of the Spanish word vaquero, literally “someone having to do with cows.” Minding them, counting them, seeing they had pasture and water and safety from predators. Moving them across the range toward buyers and railroads to be shipped back East to market.

The cattle drive was a huge test of stamina and ability for all hands. With one rider for every 250 or 300 cows in a herd of up to 3000 head, the work was hard and dangerous, the hours long and the trail no place for anyone with jumpy nerves and limited courage. Indian raids, swollen rivers and stampedes took muscle, grit and superior horsemanship. Only the best men of the range were hired to make a drive.

Texas writer Ramon Adams describes a stormy night, a clap of thunder and a herd that blew up in fright and just disappeared in a roar of hooves and bellows.

“It sounded like hell migratin’ on cart wheels.” Confusion, crowding, lightning flashes, shaking earth. A sea of horns like “a moving thicket of skeleton brush.”

During any stampede the riders tried to gain position alongside the lead cattle and head them into a circle. “Racing neck and neck with the leaders, the cowboy urged his horse so close to the plunging mass that the hot breath was on his leg and the smell of panic in his nostrils. He used his slicker to flail, bringing it down with wide, overhead strokes into the faces of the foremost steers. He yelled, screamed, and cussed those wild brutes until he felt a yielding of their close-packed bodies.

“Finally, when they had stopped, there was water everywhere… Then the cowboys, wet to the skin, cold and miserable, stood guard for the remainder of the night. Perhaps one or two broke into song, but it took a brave man to sing under such conditions.”

This article ran in the summer 2000 edition of High Country.