The history of tiny Chama, NM is packed with Western adventure
by Jill Lane 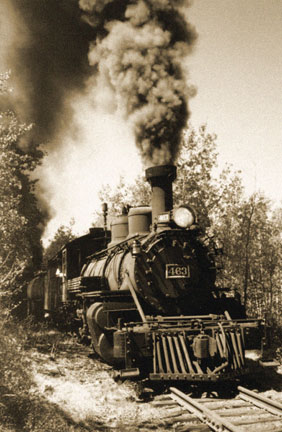 The tiny village of Chama, New Mexico, sits at the base of 10,000-foot Sangre de Cristo Mountains in one of America’s most spectacular settings. Today, a charming tourist town, Chama exists predominantly for its historic narrow-gauge steam railroad. This same railroad dominates Chama’s beginnings in the 1800s.

The area’s history began well before the railroad’s arrival. The territory originally was the summer hunting ground of the Navajo, Ute and Apache Indians. In the 1600s the Spanish began to explore and settle the New Mexico territory. But unlike most of New Mexico, Chama was not settled by the Spanish. The Indian tribes, disinclined to relinquish their fertile land, held off the Spanish settlers here and it was another 200 years before Chama was born.

In 1848, U.S. forces engaged the Indians in a battle on Cumbres Pass and took control of the territory. A natural town setting located between the base of Cumbres Pass and the Chama River, settlers recognized the area’s bounty.

Chama developed as a timber town. Unlike its adobe neighbors to the south, it sprung up from rough-sawn lumber and was nicknamed “Slab Town.”

Chama was not without its share of Wild West history. Skirmishes occurred daily with gunshots ringing out from all directions. Indian attacks, stolen horses and livestock, stagecoach robberies and saloon rowdiness all created an aura of wildness in Chama’s young days. A cemetery was founded early on with a designated Pine Tree for the popular “necktie parties”— a result of any one of these lawless outbreaks.

By 1876, news arrived that a plan to build a railroad was in the works. Recurrences of floods in the original town setting along with the location of the new railroad tracks and depot resulted in the relocation of the original Chama settlement to its current location. The glory days of Chama began then with the arrival of the Denver & Rio Grande Railroad.

Railroad workers and families came from around the world, giving history to founding family names like Foster, Sargents, and Kelly.

The first passenger train rolled into the Chama Depot on Dec. 31, 1880. The D&RG Railroad transported people and goods from one side of the mountain to the other twice daily filling Chama with transfer passengers disembarking to shop, dine and overnight.

Even so, life in Chama was never dull and saw its share of disasters. In 1882 the railroad storehouse exploded, raining destruction throughout. A few months later, the town drunk knocked over a kerosene lamp destroying most of this wood-built town. The rebuilt Chama was once again gutted by fire in 1899 when the first Depot and Roundhouse burned down. An exact replica of the Depot was built on that same site. That Depot still stands today, adorned with several historic registry designations. The original Foster’s Hotel, Chama’s oldest building, is purported to still house ghosts of its past.

From its arrival on its silver tracks, the railroad was the lifeblood of Chama. But as the glory rail days ended, so too did the life of this train line. The Denver & Rio Grande’s last passenger train rolled into Chama on Feb 1, 1951. Unlike many other old railroad towns, Chama survived. In 1970 the train re-emerged as a tourist train, with the new name of the Cumbres & Toltec Scenic Railroad.

Celebrating its 40th anniversary this season, the historic narrow gauge train takes riders back into history. The C&TS RR still carries riders over the high mountain pass aboard its antique rail cars. The downtown is little changed from those early railroading days.

And today, just as in the 1880s, the train’s whistle resounds throughout Chama, providing a symbol of yesteryear to tourists and residents alike.

This article appeared on page 35 of HighCountry Magazine 2010.