When everybody else is shoveled-out, this skier goes up again and again… and again | Excerpts from his book by Wayne Sheldrake / 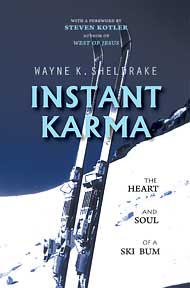 Just forty minutes from my home, Wolf Creek typically opened in October, earlier than any other ski area within 150 miles. Since I’m not a season ticket holder, this is a torturous fact. It’s like being kept inside for recess and then forced to watch everyone else play outside the classroom window. Several seasons back, Wolf Creek opened even earlier than usual. With an acceptable base already on the ground, local forecasts soon called for a big storm. Heavy rain in Southern California was a precursor to several days of snow in the San Juans. On a Friday morning it started. Flakes the size of potato chips descended like dragon flies, and snow stacked up in my front yard. I suffered symptoms: sweaty palms, accelerated heart rate, dizziness, dry mouth. Before my wife had pulled out of the driveway on her way to work, I was calling in sick. To calm my jitters, I set up my ski tuning bench, filed the edges and waxed the bases of my favorite pair of skis. The aroma of the wax was soothing, hints of vanilla and cinnamon. A trace of white smoke rose from the tip of the iron. A half day will be plenty, I told myself. What’s a credit card for?

I scratched a film of ice from my goggle lenses. They immediately iced up again. I looked into the white maw through two small portals. I sensed the evolution of the front. When you’ve lived in the mountains long enough, the birthplace and life of storms are disclosed by the doorways through which they appear. Years of recognizing patterns and cycles—feeling the weight of the sky, breathing humidity or lack of it, shivering at sudden gradients of temperature, sniffing micro-dusts from the jet stream—feeds your hunches. It smells like it’s going to snow, and it does. Over the years, your hunches are verified and honed, tested and calibrated, against the collective archive of the community. In high country, the weather is the real news. Volatile and fickle, it’s more entertaining than politics, and more far-reaching.

Thus, the hypnotic attraction of a snow storm. For its relatively short duration—a few hours, a few days—it rules. Each storm has a body, idiosyncrasies, personality. Years hence, we remember the gravest blizzards like a good scare, a thrill. We gossip about them, intimately, as if an axe murderer came knocking door to door late one night, and we all saw him through the keyhole, saw how fat and bearded and lurching he was. We smelled his whisky-breath streaming under our thresholds. Then in the morning, when the town was plastered with eight inches of new snow, we realized the stranger at the door wasn’t an axe murderer. It was Santa Claus.

I leaned into the front’s interference scraping my goggles and skied. Weird temperature fluctuations distorted the snow pack. It was sticky, like Velcro, and you had to ski fast to scrape the frozen frizz off the top and get to the soft muff underneath. I crossed a road onto a steep wind-scoured corner. The squishy powder suddenly thinned to bony patches. The ski edges bit on a bare spot and my feet spit ahead as they were smacked out from under me. The tilt of the mountain became acute and I was airborne, like Orion tilted in the winter sky. My arms swung wildly. In the bizarre light and with my goggles iced-up, I couldn’t find the slope. I felt like I was hanging from a clothesline, one pin holding. I squeezed my pole grips as if they were the bars of a trapeze.

Just as I went limp, ready to fall, the wind sheared. My left ski found the hill. The right splashed down like the companion hull of a catamaran. Saved. But the skis settled on an island of exposed wind-polished ice. They accelerated and skidded sideways. Then they both whacked a soft berm. I was pitched again, in the opposite direction, airborne, horizonless and off keel. I was convinced I was going down. But, the wind flip-flopped. Switching from a stiff-arm mashing squarely in my chest, it figure-eighted around and pushed me from behind, cinching up under my arms. I vaulted upright, as if the same unseen hands dunking me the moment before had suddenly yanked me up. The skis came underneath me; my weight was miraculously centered. A glowing, interior rush melted the cloying pallor that engulfed me. I was giddy with relief. I’m lucky. I’m lucky, I thought. I can walk under ladders.

By the end of the run, my goggles were crackled with a kaleidoscope of ice. I scratched away two portals again. The feral turbulence of the blizzard had clawed deep drifts around every chairlift tower, every corner of every building, every stick of bamboo, every shaft of every sign, reminding me that five inches of whipsawed chaff was just the beginning. That wind shear that had plucked me from disaster told me that this storm was actually two storms slamming into each other. Monsoon moisture, warmish and muggy, funneled up from the Gulf of Mexico, 1,700 miles away, and rammed into a system carried out of the Pacific Northwest by the Arctic Jet Stream. It meant critical mass, snow erupting from the collision.

Skiing run after run on a mountain that felt like it had been evacuated, I felt like I was getting away with something, a major art heist or an undetected bank robbery. I felt like that little boy in the Rockwell print, out-running a spanking with a stack of books jammed down his trousers. The storm intensified. Burrs of snow stuck to everything. Chair pads, lift towers, skis, ski poles, skiers. The folds of my parka, gloves, and bibs froze stiff as tin foil. The snow didn’t so much fall as unscrew itself from the air. It seemed impossible that any of it reached the ground. I skied, into a winding, white gullet. The taste of it turned labial, sweet. It was rooty—peat with a snip of fresh celery—and dusty, with the garden-sharp bite of radish and washed greens. There was a subtle neutralizing garnish, too… parsley. I scratched at my goggles, constantly. The skis floated to the edges of trails, banked off rolls, snuggled near the trees, sliced along the shoulder of a trough (a snow covered creek). They lifted and dropped me over rows of grave-sized mounds, then shoved me over a traversing road. I had no blue print, no visualization of where I was going. It was a dance. I stood on the skis like a boy on his mother’s toes and they found the rhythm, made the moves. I pressed my shoulders, hips, knees, and feet forward. My fists reached and gripped. The skis whiffed through white froth, curtains sprayed from their tips.

Time passed. The lift operator was covered in white chunder, freezing. She was shoveled-out, beat. It was late. I was the only skier left. Everyone else, either cold, or exhausted, or worried about the roads went home—quite sensibly. Empty chairs cycled by, ghostly. I went up again. At the top, I slid to boundary ropes along the Divide. I leaned against the howl like a wing walker. On a clear winter day, the overlook would have had a view of a jagged rhombus, the western partition of the pass, the fortress front of Colorado wilderness. On a clear day, the near range of acute, scalene peaks stabbed at the sky like a stack of broken plates swept up against a blood-blue wall. The steep faces and shunts and shakes of fractured granite leaned on each other, gleaming. Some days, they appeared pewter: aprons and shins and thighs of discarded armor. The rock’s gaps and avalanche chutes, chinked and flossed with snow, rose from the steep V of a descending glacial valley. It seemed a thousand years since I’d seen that range—and like a thousand years might pass before I’d see it again. The snow stung my face like gravel thrown up by a passing semi. The wind folded and whacked the bamboo fence line wildly. I stared into vitreous, white shadows—into a massive empty hold.

– An excerpt from Chapter Ten of Wayne Sheldrake’s memoir Instant Karma: The Heart and Soul of a Ski Bum (Ghost Road Press), available at amazon.com or your local independent book store.