An American Veteran and his spouse stand at the bottom of a Native American healing ceremony circle laid out on a gym floor in Angel Fire. Their hands are covered in red mud, a symbol of trauma. They each walk halfway around a separate side of the circle, then toward David Singing Bear, a Native American healer, who stands in the middle, his feet planted firmly on the ground. First, the mud is washed from their hands, marking a 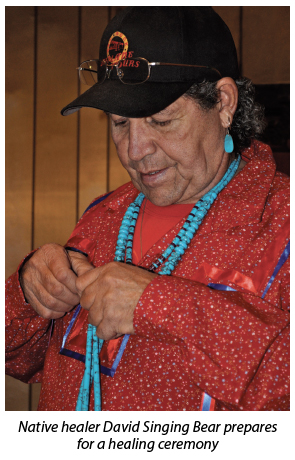 fresh start. Then, he covers the pair with a blanket. The ritual washing of the mud signifies the removal of enormous trauma. The couple then walks slowly together toward a soldier’s cross—a rifle standing up in a pair of shined black boots, with a soldier’s helmet sitting atop—and salute it. Perhaps they are saluting the disciplined military lives they have led, or perhaps it is a salute to fallen comrades. But they are saluting something else too: a new life without Post Traumatic Stress Disorder (PTSD).

They are the walking wounded, among the many who return from service with invisible injuries. An estimated 30 percent of returning soldiers are afflicted with PTSD, a severe anxiety disorder that often goes undiagnosed. It’s not particular to military experience, either—it occurs within the civilian population—but it’s understandable that military families in particular are very likely to suffer symptoms of PTSD. One vet called it: “a normal response to an abnormal event.” Many veterans with PTSD experience symptoms such as recurring nightmares, detachment, an exaggerated startle response, extreme anxiety, sleep disturbances, and re-experiencing of traumatic events, just to name a few. The Veterans Center at Angel Fire is at the forefront of serving and acknowledging those afflicted with PTSD, a population whose illness so often goes unrecognized.

A few years ago, John Garcia, then secretary of the NM Department of Veterans Services, had a vision: New Mexico would be the first state to help veterans overcome PTSD. Fast forward to 2011, and Chuck Howe—the first president of the National Veterans Wellness and Healing Center (NVWHC). Howe is currently on the verge of realizing Garcia’s vision. Howe, the ideal veteran we all imagine, is confident, steady, trustworthy. When you hear him talk about this idea, you already feel he will be successful.

“We have a lot of veterans in Angel Fire,” says Howe, a Vietnam veteran himself. “The alpine setting makes it optimal for relaxation and nature therapy.” The community is eager to support the program with housing, food, facilities, horses, even a boat donated for use on Eagle Nest Lake. The State has funded seed money for the program. Future funding will all be raised by the center.

Howe and others established the NVWHC in 2009 to help veterans and their spouses cope with symptoms of PTSD. It is the first and only center of its kind. The center offers both traditional and non-traditional therapeutic methods such as equine therapy, Native American rituals and reiki. And no veteran’s therapy program would be complete without intensity. Participants begin each day at 7 am and go until 8 pm or later in the evening. Participants are asked to not watch TV or drink alcohol during the program. By the end of the week, couples have been through 58 hours of deployment and reintegration training. “The benefits received from the…alternative therapies show that alternative therapies really do work,” one vet said.

Native American rituals are big here: “When Native Americans sent troops into battle, they had rituals to prepare their warriors for that,” says 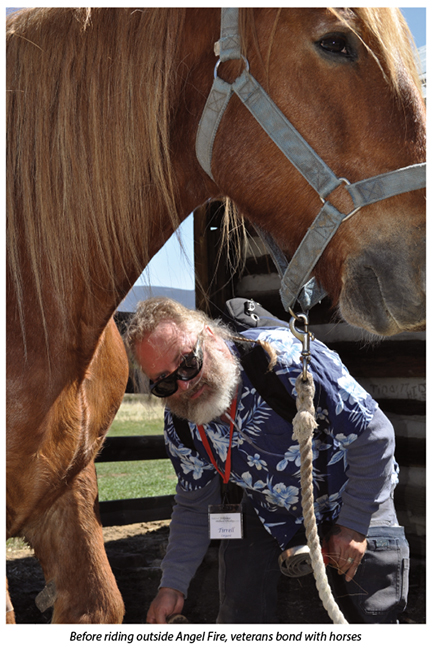 Howe. “They had ceremonies when they came home. Today’s military has no rituals.” Success rates are based on the reduction of PTSD symptoms reported by veterans after the retreat. In the military, you rely on your fellow soldiers. In this case, a spouse or significant other is a mandatory part of the therapy. One veteran’s wife felt such relief after the end of her week in Angel Fire. “It was the most invaluable therapy I’ve ever been to because they listen to the men and the women.” Another veteran’s wife echoed that idea. “This is the only program…that addresses the couple as a unit rather then the vet individually.” This paired therapy is a big deal to the couples, since it’s the only way that these victims of trauma will have a built-in support system afterwards.

Put a bunch of guys in a room in order to talk, and the silence can be deafening. There’s often a stigma for veterans to talk about their traumatic war experiences. After a day or two, it’s usually the spouses who soon begin opening up. And then life starts to transform. The stories of trauma, loneliness, and fear well up, and the guys are not far behind. Howe says after a few days veterans will start to talk. “Usually by day four, they will have turned a corner. By day seven, they are often sold on therapy.” By the end of the week, many have begun to move past the darker places in their lives and into a healthier place with less PTSD symptoms.

During a week-long session, veterans begin to realize how much their spouses have been through, as PTSD plagues the families of veterans, as well. In a 2009 session, the men wanted to do something to commemorate the sacrifices made by their spouses. So they all got together at a special ceremony during dinner on the last evening of the retreat to honor spouses. “We have not done enough to bring our veterans home,” Howe says. “But with programs like this, that is starting to change.”

— Gus Herold is a Colorado-based writer