All over what is now New Mexico, you could once find Navajo saddle blankets—on actual horses, not just on the walls of upscale collectors. They were essential equipment for cowboys, a calling card. How could you get hired on as a cowboy if you didn’t show up with a genuine Navajo saddle blanket? These saddle blankets were a very hot commodity in this part of the country. As time passed and the cowboys were fenced out of the open range, they continued to show up at rodeos all over the West.

Saddle blankets have quite a story to tell. At one time, though, they were considered to be the lowliest member of the always-prestigious Navajo textile world. Recently, a dealer told me he had just sold a chief’s blanket for half a million bucks. This was not the case with the smaller and more populist saddle blankets. They are not of that ilk, though they are gaining value—not only because the older ones are becoming rarities; this is not about market share. They are tangible reminders of the way that, in the West, we are all in this together. Everything—our economies, ecologies, and our cultures—are all intertwined.

Saddle blankets are singular, the only textiles made on transportable looms with a continuous warp, meaning the weaver got to the end of the piece, and then turned around and just kept on going. The metaphor can be extended. The weavers conjured up amazing designs—complex geometrics, pictorials, even op-art designs—all held in the mind’s eye as the weaver patiently fed the yarn to the loom until it emerged whole, full of life. This was after raising sheep, shearing, cleaning, dyeing, carding and spinning the wool. Then the actual product was toted across enormous distances of the remote Navajo reservation, usually for barter at a trading post (this is still the case in some of the Four Corners areas). Beliefs taught the Diné, as The People call themselves, to weave in harmony and to walk in beauty. Still, traditional and regional design influences are reciprocally a part of the Navajo sense of wit and inventiveness. This extends to individual weavers, usually anonymous women, who wove day in and day out, as their babies grew, in summer’s intense heat and winter’s bitter cold. The appreciation for beauty that is woven in is both collective and individual.

Thus cowboy history became intertwined with that of the Navajo. They also wove in their own history of tragedy and joy. They wove during their internment, after Kit Carson marched them away from their homeland in 1864, destroying their flocks and their fields. When they returned, weaving helped them start all over again. The government supplied them with wool, having decimated their flocks four years earlier. Ironically, some of the darkest times resulted in the brightest weavings, since the government commodities also included colorful artificial dyes called “Germantowns” from Pennsylvania woolen mills.

These weavings reflect enormous resilience. Weavers adapted to turbulent market economics. Early on, saddle blankets were not made for sale but for the Navajo’s own use. When their other weavings were worth more as essentially tourist items, they still used saddle blankets for themselves. Arriving on the scene in the later 1800s, tourism and railroads, along with the prevalence of trading posts, shifted the economics and even the aesthetics of weaving, but this was less true of saddle blankets. This was, in part, thanks to the cowboys, who weren’t interested in them as souvenirs of “Indian life” or for their parlor floors. 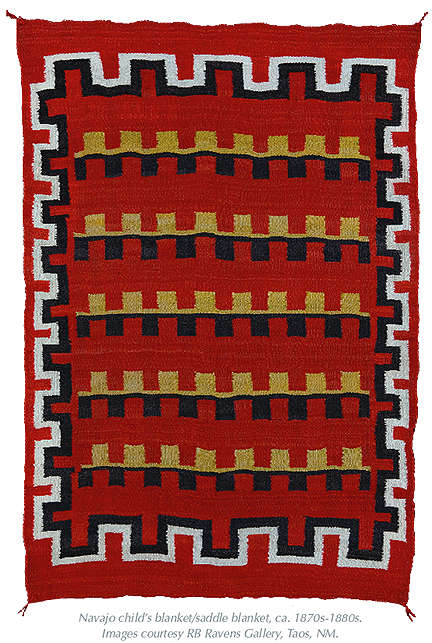 Cowboys even had a hand in the design, commissioning textiles to include things like their girlfriends’ initials (instead of getting tattoos) or the initials of the ranch, as in the case of the UU Bar Ranch near Cimarron. Traditional geometric elements figure enormously in saddle blankets, of course. In pictorial textiles, cows, horses, birds, and very often, American flags show up.

Even horses influenced design. Before the Spanish arrived in the 1500s the Navajo had never laid eyes upon horses or sheep. They made good eating. But soon, the adaptable and clever Navajo became known as “lords of the prairies,” breathtaking horsemen. Eventually, saddle blankets became larger to accommodate the cowboys’ bigger horses. Weavers began making double saddle blankets, which were folded up underneath the larger saddles. The elongated rectangle transformed aesthetics in new ways.

The fact that a blanket was something of a tease, mostly hidden beneath a saddle, shifted aesthetics in yet another way. One stunning result was that weavers often made saddle blankets with “empty” centers. A lot more interesting than a blank TV screen, these spare and elegant spaces act like placeholders for the Zen-like nuances of natural wool variations so evocative of horizons and mesas.

Perhaps making one was Zen to the weaver too, as a blanket might take months or even years to complete. A couple of years of hard wear beneath a saddle, and it was plumb wore out. Others were lost to moths, or just the ravages of time. Saddle blankets lived good, hard, useful lives.

Those that remain breathe grace into our own lives. They are many things—haunting, elegiac, witty, clever, ingenious, and indigenous—bespeaking the mythology and tough realities of the West. They are not really mute witnesses to the times; they seem quite sure of what they speak.

This article appeared in the 2012 issue of Ski Country, page 20.