Who among us as earthbound animals hasn’t dreamed of sprouting wings and launching into the sky, free to soar over the planet? Lofty dreams few of us ever get to live. / 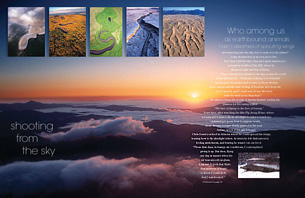 For Chris Dahl-Bredine, that pilot spirit started as a young boy in Silver City, NM, where he dreamed night and day of flying.

“I have always been drawn to the sky, seeing the world as the birds see it… I’d dream of flying over beautiful landscapes, mountains and oceans. In those dreams there was an unbelievable feeling of freedom, free from the ties of gravity, and I could soar in any direction with the wind at my fingertips.”

He takes to heart the words of Amelia Earhart, fueling his passion for becoming a pilot:

Years later, after watching the film Fly Away Home, where a young girl learns to fly an ultralight in order to teach her orphaned pet geese how to migrate south, those dreams became firmly planted in his soul.

And so, seven years ago it began. Chris found a school in Arizona where he could spread his wings, leaning how to fly ultralight trikes. At times he felt disheartened, feeling airsickness, and fearing he wasn’t cut out for it.

“Those first days, in bumpy air conditions, I contemplated giving it up. But then, flying one day at sunset when the air was smooth as glass, it hit me. It took that flight, that moment of magic, to know I could do it.

And I was hooked.”

Chris saved to buy his first trike – a three-wheeled aluminum and alloy motorized craft with high-tech fabric wings and a total weight of 400 pounds. He found hangar space with the friendly folks of Ross Aviation at the Angel Fire Airport, an airstrip with an elevation of about 8,500 feet above sea level, and started to get the hang of high altitude flying.

As he began learning about mountain flying with updrafts and downdrafts, wind shears, thermals, and thunderstorms, Chris said, “Sometimes it got a little scary. I’d get tossed around and feel like I might drop out of the sky.” While the craft is capable of flying at these altitudes here in the southern Rockies, it is crucial that pilots have a bailout plan, always on the lookout for emergency places to glide to in the event of an engine failure.

One morning, flying at dawn, the airstrip became socked in by fog. As he was running low on fuel, he spotted a cow pasture east of the airfield which was above the fog and landed. The cow herd came running over to check him out while he waited for the fog to lift so he could head back to the airport.

Chris eventually went to France to learn the art of ski-flying, taking off and landing on snow in the mountains with three snowboards mounted on the trike. Now, the wintertime is one of his favorite times to fly, when there’s a window of calm air between storms. He usually flies at dawn or dusk when the air is smooth and the light is best for photographing the spectacular landscapes and skies of northern New Mexico.

Prior to flying, Chris had dabbled in photography for years. But when he started flying, his photography really began to take off. He started with 35mm film and then upgraded to two and a quarter medium format film in order to better capture the detail of the southwestern landscapes. His camera is worn around his neck and has a gyro-stabilizer attached to it which keeps the camera from shaking and allows for better low-light photography. 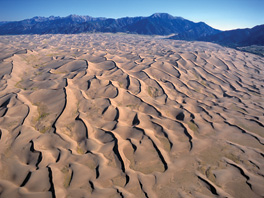 He’s flown and shot all over the region – the Sangre de Cristos, Wheeler Peak, Moreno Valley, Eagle Nest Lake, Rio Grande valley, Valle Vidal, Sand Dunes, Silver City, Chaco Canyon, Sedona and even Hawaii. One day he hopes to get to know the rest of the Americas from the air, from Alaska to South America. His trike can fly four to five hours on a tank of gas at about 60 mph.

His family and friends at first worried about the inherent dangers of the sport, but after taking flights with him and experiencing it first hand, they’ve learned to share his enthusiasm for flying and his love for experiencing the earth from above.
To explore the rugged beauty of the southern Rockies through his images, visit Jack Leustig Imaging in Arroyo Seco, Chimayo Trading in Ranchos de Taos, or on the web at shotfromabove.com.