Northern New Mexico is a place of stunning paradox, where identities and cultures meld, hybridize, bump up against each other and explode in dizzying profusion. Ritual dances and ceremonies proliferate, especially between September 30, Taos Pueblo’s San Geronimo Feast Day, continuing through to around the time of Lent. One of the most curious and least-known traditions is that of Los Comanches. The Comanches were feared and revered enemies and ancestors. 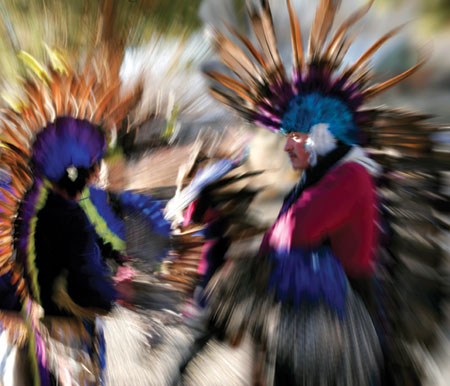 One of its several manifestations occurs at the famous adobe St. Francis de Asis church in Ranchos de Taos at dawn on New Year’s Day. Dressed in buckskin, fringe and especially, the colorful single line feathered headdresses, singers and dancers appear both inside the church’s courtyard and without. Drums throb and bells jingle. Moccasins and tennis shoes grow wet and muddy. Some words are Spanish, the trade language of Colonial times, and the music and chants are a rich amalgam of diverse rhythms, language and intonations from many tribes and peoples.

From the Ranchos de Taos plaza, Los Comanches and friends jump into trucks and cars to visit and dance at private homes. They celebrate, comfort, and entertain, especially in the communities of Ranchos, Talpa, and Llano Quemado. These communities in particular are the site of remembering and belonging for these highly hybridized ceremonies. Elders named Manuel or Manuelita are particularly honored in conjunction with the season of Emmanuel, the coming of the Christ child.

According to Hermanitos Comanchitos, by University of New Mexico literary folklorist and cultural historian Enrique Lamadrid, the Comanches are “Numunuh”—a southern Plains people; he believes that those in the Ranchos area are likely descendents of Hispanic and other tribal captives taken by Comanches and raised as criados, a word which meant “adopted servants.” They often became part of their “adoptive” families.

He repeats a popular verse from San Antonio del Embudo:

New Mexico beloved,
pay no attention to rumor,
among Indians and Americans
we are all coyotes [mixed bloods].

So much for the myth of a separate tri-ethnic identity.

The celebrations reflect fear and admiration for the Comanches, particularly Cuerno Verde, a powerful tribal leader. Other songs are mournful, moving listeners to tears. Violence was part of life, particularly in Colonial times, but weapons were put away in a kind of “mercantile peace,” long enough for French traders, plains tribes, Spanish speakers and those who were to become “New Mexican” to get down to business. The gains of the plains—buffalo hides and meat—were traded for the agricultural products of the more sedentary farming regions in the Upper Rio Grande basin. Another “commodity” was people. They were bought, sold, and ransomed.

The tradition of Los Comanches is different, though, from the concept of Comancheros. A comanchero originally meant a New Mexican who dealt with Comanches and plains tribes. “The later connotation of criminal outlaws is a misnomer,” according to Taos writer and Los Comanches participant Jerry Padilla, referring to Charles Kenner’s book The Comanchero Frontier. Padilla notes that the influence of these songs was so strong that men in northern New Mexico and southern Colorado, up until about World War II, sang these songs as part of their workday, or even afterwards, to entertain each other.

One man from the Mora Valley remembers a story told by one of his father’s older relatives, who tells of being taken by the Comanches at the age of ten. As the story goes, he was caged and fed until one day she decided to let him go. Pointing in the direction of where he was from, she indicated that he should hide by day and travel by night. He eventually reached home.

Padilla says that the songs and dances “honor certain animals (Aguila, Coyote, Tortuga, El Torito); honor rivals (El Espanta’o); respect elders and leaders (la Rueda); and are for benefit of the community (Chimal).” There are friendship dances, line dances, animal dances, and honoring enemy dances. A fascinating psychological aspect seems to take place; the “Cautiva” or captive songs and dances apparently helped the victims who learned them to detraumatize and assimilate. It was a common story that as time went by, some of the captured resisted being returned to their original families when their “saviors” eventually arrived.

Francisco “El Comanche” Gonzales tells a story of his own orientation into the Comanches de la Serna: “My father was very involved. I danced since I was three.” He went away to the service and in the mid-sixties returned to Taos on New Years Day, but the Comanches rituals had almost died out in this area. He set out to revive them.

The songs, dances, and dramas were renewed. Older folks remember the oral tradition and choreography and pass them on. These practices reach as far away as Mexico and as nearby as Alcalde, where a war drama is enacted—on horseback!

Gradually, more young people have been initiated into Los Comanches. A sense of identity runs deep and goes back a long way. It also claims the future. Norberto Ledoux II, age 28, says that he encourages kids as young as four or five, including his own, to dance. It’s difficult, he says, because the regalia and costumes are expensive and take a lot of work to maintain. Still, for him, it’s “a time of unity for the community.” During the year, the community may have suffered deaths and losses, and this is a way to come together and to celebrate that community and to acknowledge loss. As he puts it, “It’s a time of mending.”

Lamadrid writes that when circumstances are right and there is a “significant number of strangers present” the Comanches may also invite everyone in the circle to join in the “Baile de la amistad” or friendship dance, a circle dance also found at powwows, a feature of which is a shuffling sideways step which keeps the circle moving. In spite of murder and mayhem, perhaps these dances remind us that the possibility of friendship and peace exist even in the midst of strife. People find themselves drawn into a complex history, one in which new blood is always joining old. To this day, Los Comanches are still coming.

— Michele Potter is also a confusing welter of hybridized identities. A Norwegian-American from South Dakota, she is also a mom, college teacher, recent Ph.D., ski instructor, and bartender.

This article appeared on pp 18-19 of the Winter 2007-2008 print edition of SkiCountry. Photograph by Geraint Smith.