If a man can be king of all he surveys, the lieutenant was king of the West. 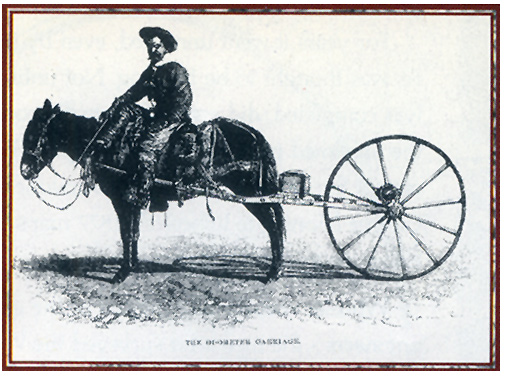 Presiding over northern New Mexico’s Enchanted Circle is Wheeler Peak, the tallest mountain in the state.

For years it went unnamed, even by the surveyors, and Truchas Peak, just north of Santa Fe, was thought to be top dog. Not until the turn of the last century, years after the survey was completed, did someone actually compare the data on the two peaks and realize that the unnamed peak above Taos topped Truchas by more than 100 feet. No one knows who gave it the name of Wheeler but anyone who loves maps knows why: First Lieutenant George Montague Wheeler’s 1877 maps of the American West are scrupulously detailed, elegantly rendered classics.

Wheeler was literally the last of the great Army surveyors, the U.S. Army Topographical Engineers – the men who surveyed the West – and his maps are testimony to the cartographer’s craft. Graduating from West Point 1866, Wheeler received his commission in the Army and went on to cut his teeth on the 24,000 square mile Nevada-Arizona survey in 1869. His spirit caught by the West, Wheeler wanted to survey it all, a massive undertaking that he wished to take a step further. He proposed to map systematically the entire territory west of the 100th meridian, some 1.4 million square miles, at a uniform scale to produce general purpose topographical maps that, when laid out flat, would connect at the lines of latitude and longitude. Although such maps had been completed in Europe by the military over 100 years before, Wheeler was the first to survey the United States in that fashion.

Wheeler’s field parties consisted of some 40-odd professionals – geologists, astronomers, botanists, ethnologists – officers and enlisted men, packers, herders, teamsters, laborers and mules. They would have been among the first non-indigenous people to have climbed New Mexico’s highest peaks. The pleasure of hauling 40-pound tripods and transits up the sides of 10000-foot mountains was only one of the benefits. On one occasion, the party found itself on a snowy outcropping above a long snowy incline, into which they were going to cut steps until an incautious astronomer…

“…stammped {sic} his heels on the edge to try its brittleness. His foot slipped from under him, and the next moment we were thrilled by seeing him sliding down the mountain with the velocity of a flash of light. He was in a sitting posture, his hair was blown back, and his hat slowly rolled down after him … he carried a spiked tripod, which made an excellent alpenstock, and with fine presence of mind he plunged this into the snow between his legs, slid half way up it, and suddenly came to a stop.”

Establishing several accurate positions to use as reference points for triangulation was the first order of business. Points were defined in terms of degrees, minutes and seconds north or south of the equator and east or west of the Prime Meridian that runs through Greenwich, England. The determination of latitude was made very simply by measuring the distance between the horizon and Polaris, the star almost above the north pole.

Longitude was more difficult, involving the difference in time between Wheeler’s position and Greenwich, aggravated by the rotation of the earth. Very accurate timepieces were required for exact work and stations were established in the field for this purpose, usually on mountain peaks. Celestial observations, the position and movement of certain stars, were used for calculations.

“…when the other members of the party are chatting around the camp fire, the astronomer retires to a dark, quiet spot with his instrument, and lying on his back, or resting his elbow on the rough ground, occupies himself with the stars, which never seem so cold, so far, nor so brilliant elsewhere as they do from a peak in the Rocky Mountains…”

Altitude was determined with a cistern barometer, a slender glass tube filled with mercury. Conditions in the field were such that they were always getting broken, leaving the party without th necessary instrumentation. There is a story about how Colonel Fremont’s field party, in his 1842 mapping expedition, found the altitude of a certain peak by boiling water when all his barometers were smashed.

Once the framework of trangulation was established, topography was filled in by the meander method along roads or trails using a sketchbook and transit to note physical features. Wheeler brought this method to a high degree of reliability in spite of the odometer, used for measuring distance.

“To see the odometer on a steep mountain trail is better fun than a circus; as it wobbles along a good road, it excites the curiosity and conjectures of the natives, to whom the one wheel without a body is the acme of ludicrous uselessness; but on a precipitous path, strewn with enormous bowlders {sic} and netted with chaparral, it shows the infinite possibilities of its motions. At one moment it bounds from the ground and saws the air; then it swings over the rider’s head, and assumes the appearance of a patent hair-brushing machine of unusual proportions…”

Problems of accounting and accountability brought all of the Western surveys to an end in 1879 when the U.S. Geological Survey was created to assume all surveying, mapping and geological investigations. Wheeler was allowed to complete the maps for the area he had already covered, perhaps a quarter of the entire expanse. He nevertheless managed to publish several topographic atlas sheets in a connected survey. Today these maps live on as monuments to the scope of work he undertook, and illustrate better than any history book the cultural features of the Old West at the close of the frontier era.

-Charlotte Amrine Hollis, with thanks to George Robinson of Old Prints & Maps, Taos, for sharing his passion for Wheeler along with the maps and books needed to bring the Lieutenant to life. All quotes from “George M. Wheeler and the Geographical Surveys West of the 100th Meridian, 1869-1879” by Robert Karrow.
The Newberry Library, Chicago