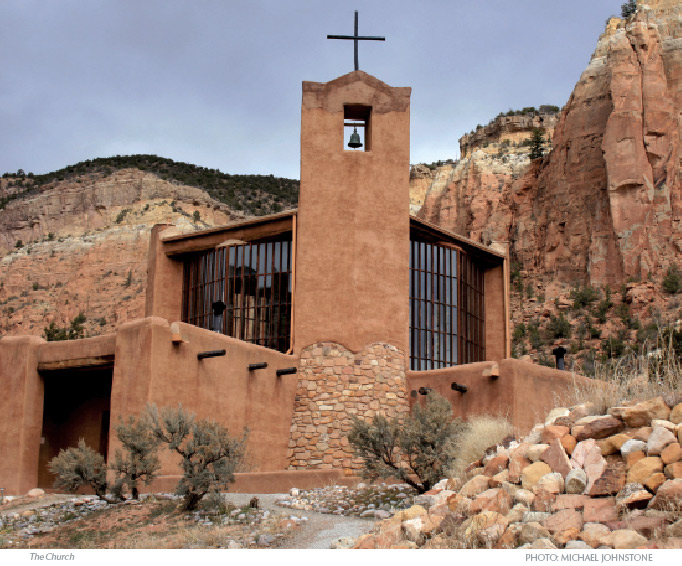 It’s easy to find the Monastery of Christ in the Desert — just cross the Rio Grande in Española, and head west on Highway 84. Proceed past Abiquiu and on the right lies the Ghost Ranch. The surrounding majestic landscapes inspired Georgia O’Keeffe and contain the bones of obscure dinosaurs. Then after another mile or so take a left turn on Forest Service Road 151; from here it’s just a 13-mile journey on a rugged, one-lane dirt road. Drive across the cattle guards, past the chamisa, the cholla, the junipers, and the cottonwoods lining the Rio Chama. Continue beyond the campgrounds, the fishing holes and the trailheads. Pass the river access points for rafters and kayakers; being careful to avoid the wandering cows. Drive slowly as the road is sometimes narrow, sometimes washed out and sometimes quite curvy.

Suddenly from the ruddy sandstone cliffs and massive rock formations, the monastery rises dramatically. Here, devout Benedictine monks spend the bulk of their waking hours studying, praying and reflecting. To support the 300-acre monastic grounds, the monks also make and sell hand-crafted products such as soaps and painted crosses; more recently they have begun to brew their own beer.

Benedictine monasteries follow the rules of St. Benedict of Nursia, who lived in the sixth century in what is now Italy. In addition to the traditions of prayer and study, the monks have always been engaged in commercial activities. St. Benedict decreed the monasteries should be self-sufficient, so instead of asking the Vatican for funding, they ran businesses. The brewing and selling of beer by monks accompanied other for-profit activities such as bee keeping and the raising of farm animals.

The monks also brewed beer for their own consumption and to aid traveling pilgrims. Travel was inherently unsafe during the Middle Ages and due to the overwhelming lack of motels, it was the monks who tended to leave a light on for travelers. The monasteries traditionally would offer visitors three things; safety, a roof and nourishment. Since much of the water was unsafe to drink, nourishment meant a simple meal — with a beer to wash it down.

The Monastery of Christ in the Desert is a Roman Catholic monastery, founded in 1964, of the Order of Saint Benedict. The property was once a working ranch and now operates completely off the grid, with its electricity supplied primarily through solar energy, with propane as a backup. Due to their isolated location, they also operate their own water and sanitation system. There is no meaningful mobile phone service, but satellite Internet keeps the monks connected.

In 2005 the monks launched the Abbey Beverage Company, partnering with another Benedictine Monastery, Our Lady of Guadalupe, located in Pecos, NM. In Pecos they developed and tested the recipes for Monks’ Ale under the watchful eye of Santa Fe Master Brewer Brad Kraus. The beer is actually brewed and packaged in Moriarity, NM, through a special relationship with the Sierra Blanca Brewing Company.

As the monks of Our Lady of Guadalupe Monastery lost interest in brewing beer, the Christ in the Desert Monastery acquired their stake in the company. The Pecos brewing equipment was eventually moved into a new brewery building at the monastery along the Rio Chama. The beer will continue to be commercially brewed only in Moriarty until the all the alcohol licenses have been transferred. Both tasty beers though are available in stores, restaurants and pubs in New Mexico and seven other states.

After a 3:40 am wake up bell, the black-robbed monks begin their day with four hours of devotionals and common prayers. Their daily manual labor can involve working in the riverside hop yard or bottling beer in Moriarty. With 35 monks from multiple nations there is also plenty of cooking, cleaning and similar chores. Head brewer Kraus enjoys working with the monks, whom he describes as some of the most joyous people he has ever met. One monk who helps him with much of the brewing process is 80 years old.

“He is as sharp as a tack. I wish all of my assistant brewers were as good and attentive,” said Brad.

According to Abbot Philip Lawrence, spiritual leader of the monastery, beer is a good thing. “I drink beer every chance I get — but always in moderation,” he said.

For the most part though, the monks rarely drink beer; it is reserved only for special occasions, such as birthdays and major holidays. 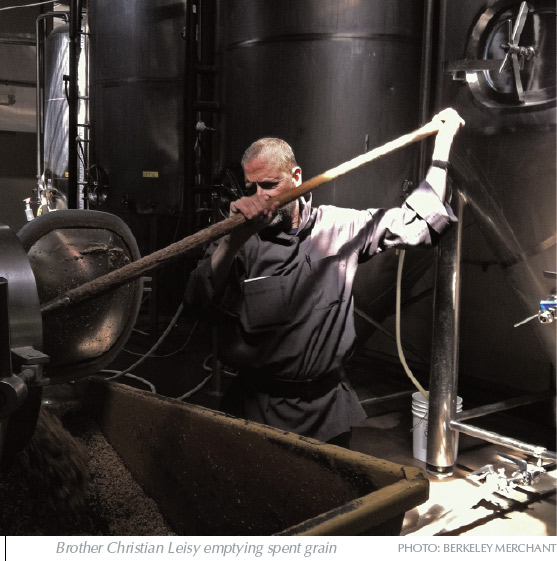 Brother Christian Leisy has been at the monastery for 35 years and is the official cellarer, the man in charge of the provisions. He is also heavily involved with the brewing operation, and additional managerial duties to keep the monastery running smoothly.

While explaining the history and virtues of the Benedictine monks, he was politely interrupted several times. First a monk needed to know when to report for kitchen duty, then he inspected another monk’s handmade beeswax candles, causally switching to fluent Spanish before issuing a final approval for the product to make its way to the gift shop to be sold. Finally, a third monk entered with a thick stack of religious documents which need to be notarized.

“Oh, I’m a notary public, do you need anything notarized?” he asked. He also speaks Italian, as he once lived in Rome.

To promote the monastery’s brews, Brother Christian recently attended the Great American Beer Festival in Denver, one of the nation’s largest beer tasting events. Clad in his traditional monk’s habit, he admits some attendees asked if he was a real monk or if it was just for show. Overall though he noted the tasters showed great interest in their beers, and asked for more information about the monastery.

Monks’ Ale is Brad’s vision of the style of beer the Belgian monks serve “in house” at the monastery, as opposed to what is sold to the public. It is called an Enkel, meaning single. It has a crisp clean flavor, a moderate alcohol content, and finishes with a suggestive hint of cloves.

Monks’ Wit is their most recent style of beer, introduced in 2010. Wit means white in Dutch, as the beer has a somewhat cloudy appearance and a white head of foam. This is because the beer is brewed with a combination of wheat and barley, instead of pure barley. Basically it is a Belgian-style wheat beer, akin to the German Hefeweizen. It has a light, refreshing flavor with very subtle notes of coriander and orange peel. 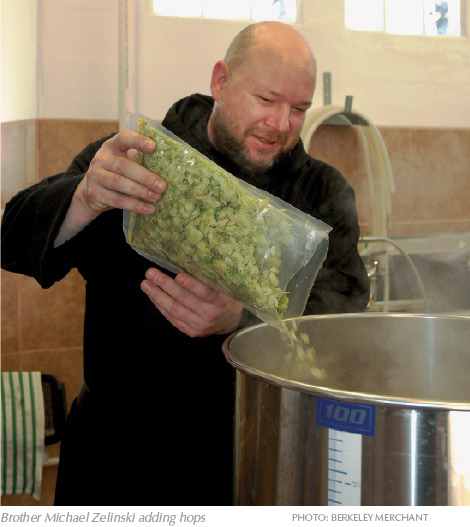 Their third beer is currently undergoing taste testing, and will be a Tripel. It should be significantly stronger than the Monks’ Ale and offer pronounced flavors of spices and fruit, such as peaches and nectarines. The ingredients include a spec­ial blend of hops grown at the monastery. The monks have been cultivating native New Mexican hops for several years in a specially designated garden, and now have 10 varieties of certified organic hops. These green cone-like plants balance the flavor of beer and are often described as bitter or tangy.

The Abbey Beverage Company is on pace to sell 1,000 barrels of beer this year, twice what was sold last year. A 31-gallon barrel is the size of two beer kegs or about 14 cases of bottles.

For the beer brewing monks of the Monastery of Christ in the Desert the focus in all their work is “to bring everything to perfection for the glory of God” as the Rule of Saint Benedict instructs them.

That makes for a perfect pint.

The Monastery of Christ in the Desert is open to the public from 9:15 am to 5 pm. Visit www.christdesert.org

Michael Johnstone uses Angel Fire as a base camp for exploring the Southwest.