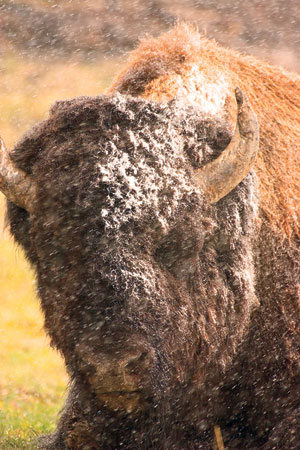 The sun breaks over a ridge and floods a mountain meadow with early morning light. A cowboy reins his horse toward a clearing on the far side of the park in order to see if his mother cows have given birth to any new calves. It is a routine the man has followed every spring for more than thirty years. The difference today, however, is that the mothers he is looking for are North American bison, not Hereford or Angus cows. This morning he finds four calves that were born overnight. They are playing with each other and only stop every now and then to take a breakfast drink from their respective mothers.

The cowboy is Doug Johnson, and he rides for Vermejo Park Ranch headquartered west of Raton. He has responsibility for 200 head of bison pastured at Castle Rock Park in the center part of the ranch. It is rough and broken country that for the most part Doug has to ride horseback in order to check the welfare and whereabouts of his cows.

Vermejo Park Ranch is carved out of a land grant bestowed to Charles Beaubien and Guadalupe Miranda by the Mexican government in 1841. Because of the frontier conditions of the time, the grant was not colonized until the spring of 1848 when Beaubien’s son-in-law, Lucien Maxwell, led settlers across the mountains from Taos to the Rayado River. Nine years later the frontiersman moved his ranch operation north to the Cimarron River.

Gold was discovered on Maxwell’s ranch in 1866. After investing in mining for several years, Maxwell sold the grant in 1870 to foreign investors organized as the Maxwell Land Grant and Railway Company who planned to sell land, mine gold, and pasture cattle.
Among the eventual purchasers of Maxwell grant lands was William Bartlett, a land and commodities speculator from Chicago who bought a large parcel of the north part of the grant, establishing a ranch on the Vermejo River west of Raton. After Bartlett’s death in 1926 his ranch sold to a group of investors who called themselves the Vermejo Club. Although the club’s membership maintained the ranch’s cattle operation, they focused their ownership on the recreational opportunities afforded by the beauty and pristine nature of the property’s high country. Among the members of the Vermejo Club were actors Douglas Fairbanks and Mary Pickford along with business tycoon Harvey Firestone, and President of the United States Herbert Hoover.
The Vermejo Club disbanded during the Great Depression of the 1930s. After World War II, W.J. Gourley of Ft. Worth, Texas purchased the ranch and expanded it to encompass more than 480,000 acres. His most sizeable acquisition was the 125,000 acre WS Ranch headquartered at Cimarron – the site of Maxwell’s ranch in the 1860s. Upon Gourley’s death the ranch was purchased by the Pennzoil Company in 1973 who in turn sold it in 1996 to Ted Turner, founder of the Cable News Network.

Turner is one of the largest landowners in the American West with ranches in Montana, Nebraska, Kansas, and New Mexico. Each ranch had previously been a cattle operation, but all have since been stocked with American bison. Of the various ranches Vermejo Park is the largest. 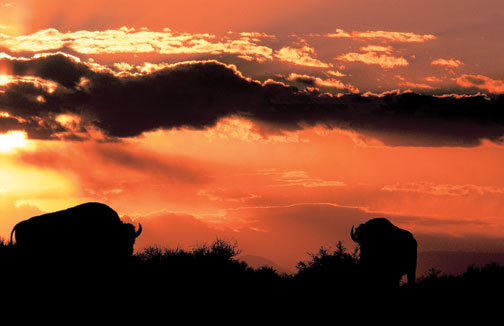 Doug Johnson first hired on to cowboy at Vermejo Park in the summer of 1974, the year after Pennzoil acquired it. He went with the cowboy crew headquartered in Cimarron to gather cows and calves out of the mountain country in the south part of the ranch. Previously he had spent several summers wrangling Boy Scouts on horse rides at Philmont Scout Ranch south of Cimarron, a job he pursued in between a two-year stint in the Army.

After punching cows on Vermejo for several years, Doug decided he wanted to see more of Colfax County’s cow country, so he took a riding job with the UU Bar Ranch near Cimarron and later the TO Ranch east of Raton. Eventually, he came back to Vermejo where he was working when Turner took over the ranch.

In the fall of 1996 Doug and the ranch’s cowboy crew gathered more than 2000 head of mother cows off the sprawling ranch in advance of the introduction of 1200 yearling heifer bison in February of 1997. Doug says that moving the cattle out of the parks and canyons for the last time was bitter sweet because it ended a tradition of branding in the spring and rounding up in the fall that had taken place continuously for one hundred years. But he says he and the rest of the crew looked forward to the challenge of working with the new stock.

Once the cattle were gathered out of the mountains and shipped to other ranches, the cowboys dismantled the fences that crisscrossed 60,000 acres of the ranch northeast of Cimarron that had been designated as the bison pasture. This immense area of rolling plains corresponded with the historic bison range of the old Maxwell Land Grant.

On Turner’s other ranches the men who took care of the bison used four-wheelers to move the animals into pens for doctoring, sorting, and weaning. But Doug and the Vermejo men were horseback cowboys, and they wanted to see if they could handle the bison using their horses. The success of the experiment was problematical given the natural antipathy between the two species.

Nonetheless, when the bison heifers were delivered to the corrals located in a pasture northeast of Cimarron, the cowboys were on hand with their saddle horses. After they unloaded the bison from the trucks, the men mounted and held the heifers in a herd when they were released from the pens. To everyone’s satisfaction, the horses and bison seemed to pay little attention to each other.

In the months that followed the cowboys spent a lot of time with the bison each day either feeding them from a truck or riding through them on horseback in order to get them acclimated to having cowboys and horses around. Periodically, they intentionally trailed groups of bison to different water holes or gathered up scattered bunches into larger herds which helped to condition them to be driven by the horses. Afterward, whenever the bison needed to be inoculated or otherwise handled, the cowboys gathered and moved them by horseback into the corrals.

In the years before Ted Turner owned the ranch, the corrals at Castle Rock Park were used to brand calves in the spring and ship them in the fall. Today, the old wooden pens have been replaced with sturdier ones made of metal pipe which are designed to handle the larger and wilder bison.

The Castle Rock herd that Doug has responsibility for is descended from bison brought onto Vermejo by W.J. Gourley from Yellowstone Park in the early 1950s. Because of its origin it is one of the most genetically pure herds existing in the United States and is consequently kept separate from the main herd pastured near Cimarron.

Doug and his wife, Rhonda, live at Vermejo Park headquarters located thirty miles from Castle Rock. As a result, he has outfitted one of the historic bunk houses near the corrals with some pots and pans and a few cots so that he can camp there when he needs to spend an extended amount of time with his cows.

Life at the camp is not much changed from what he experienced when he first gathered cattle there more than thirty years ago. As back then, he has to haul water for drinking and cooking and also cooks on a wood-burning stove. At night he reads from the light of a coal oil lamp.

But he wouldn’t have it any other way. All that is important to him is that he be able to ride in good mountain country and take care of mother cows, even if they are bison.

Historian Steve Zimmer is working on his next book in Miami, New Mexico.

This article originally appeared on page 23 of HighCountry Magazine 2006.