The story of a cowboy gone wrong 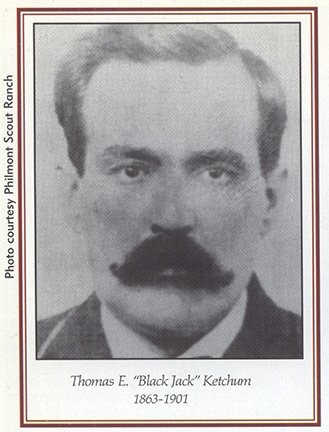 Along the walkway leading to the museum at Philmont Scout Ranch sits a large boulder with a face carved on it. Legend has it that the face is a likeness of the notorious train robber Black Jack Ketchum who inhabited the Cimarron country with his gang in the late 1890s.

The rock originally stood at the entrance to Cimarron Canyon in the piñon-studded foothills west of town. A small wire corral made to hold horses had once stood behind it. Some area old-timers have said the spot was Black Jack’s lookout, where he and his gang held an unobstructed view of the plains to the east. They also say the face was carved by one of the gang members in a symbolic statement of how Black Jack stood ever-vigilant on the lookout for his pursuers.

Other local observers are equally emphatic that the carving was done by a Pinkerton detective agent who had been sent into the mountains west of Cimarron to discover the whereabouts of Black Jack’s hideout.

Whoever the artist was, Scout Ranch officials had the rock moved from its original site on the property to the museum walkway in the late 1960s.

The Black Jack Ketchum in question was born in Texas with the given name Thomas toward the end of the Civil War. He was the youngest of three brothers. The oldest, Berry, tried to ride herd on his rambunctious younger brothers Sam and Tom after their parents died. He had little success.

During their late teens, Sam and Tom punched cows for a living, but grew to love gambling and horse rustling for pleasure. Robbing mercantile stores and post offices also occupied their leisure time. They were handsome men, both tall and physically strong. Sam was fair-skinned and had blue eyes and red hair, while his brother was dark-skinned and had dark eyes, hair, and mustache. He usually dressed in dark clothing. It was later said that it was his somber appearance that led to the sobriquet of Black Jack.

In fact, according to descendants of the Ketchum family, Black Jack was the nickname of Will Christian, an outlaw from Oklahoma and the Indian Nations who pulled a series of robberies in the Southwest. He, too, was tall with dark skin and hair, and he rode with his brother. Killed in 1897, he was mistakenly identified as Thomas Ketchum. However, Tom was never known as Black Jack among those who rode with him and continued to deny that name.

The brothers first came to New Mexico in the late 1880s, first to John Chisum’s Ranch on the Pecos River, then to the dry Cimarron country northwest of Clayton. Contemporary observers said they headed west more to escape arrest warrants than to find new range.

The historical record is unclear as to when the brothers determined robbing trains would be a satisfactory diversion and suitable source of gambling stakes. By 1897 they had been joined by old friends from Texas, Will Carver and Dave Atkins. The group spent much of that summer in Cimarron, gambling and drinking at the St. James Hotel.

During their stint in Cimarron the gang supposedly formulated the plan to rob its first train. They also established a hideout in the upper reaches of Turkey Canyon northeast of town by outfitting a cave with log barricades and a corral near where a pool of clear water was fed by a small stream.

About 9 o’clock on the night of Sept. 3, 1897, the quartet stopped and took possession of a passenger train south of Folsom, NM. They were successful in opening a small safe and dynamiting a larger one. The explosion wrecked most of the express car, but they absconded with a good part of the scattered money.

Over the next two years, several trains were robbed in southwestern New Mexico; reports implicated Black Jack’s gang as the perpetrators. Tom and Sam were also identified as the robbers of two West Texas trains that were held up in the spring of 1898.

A year later Sam Ketchum showed up again in Cimarron. He was joined by two new associates, G.W. Franks and William McGinnis, a.k.a. Elzy Lay, a former member of Butch Cassidy’s Wild Bunch.

While in Cimarron, the three hatched another plan to rob the train tht ran through Folsom. On the evening of July 11, the trio stopped a Colorado & Southern passenger train at almost the same spot they had two years before. They made away with several passengers’ bundles and an undetermined amount of money. They headed for Cimarron.

A few days later they were seen heading into the mouth of Turkey Canyon where they were followed by a posse led by two deputy U.S. Marshals and a sheriff from Colorado. The lawmen trailed them into the upper reaches of the canyon. After taking defensive positions, the lawmen opened fire. In the ensuing gun battle the sheriff was killed and several other posse members were wounded. Hostilities ceased when it began to rain. During the night the desperados made their escape, two suffering from bullet wounds.

Sam Ketchum, the most severely wounded, was apprehended a few days later and was eventually sent to the New Mexico Penitentiary in Santa Fe, where he died of his wounds.

A month after the shootout in Turkey Canyon, Black Jack attempted a solo robbery of the same Colorado & Southern train south of Folsom. The holdup, however, went awry. Ketchum was seriously wounded by a shotgun blast from conductor Frank E. Harrington.

The next day Black Jack was captured nearby without resistance by the Union County sheriff. Several days later his arm was amputated, and he was sent on a train south for incarceration in the Santa Fe penitentiary.

Ketchum’s nefarious career ended when he was convicted for attempted train robbery in October 1900. It was an offense punishable by hanging and that was the sentence handed down by the presiding judge.

Black Jack’s day at the gallows came on April 26, 1901 in Clayton. Witnesses reported that he stoically walked to his place under the hangman’s noose, evidently resigned to his fate. When the trap door was released, the weight of his body severed his head.

Ketchum’s head was sewn back onto the torso and the body was placed in a simple pine coffin. A driver and his helper loaded the coffin onto a wagon bound for Clayton’s Boot Hill. Later, when the new cemetery was dedicated and most bodies moved, Ketchum was disinterred, his coffin opened and an old friend from his trail-driving days placed flowers in the casket with a card that read, “To a cowboy who went wrong.”

This article appeared on page 41 of HighCountry 1999.