The site of Clayton has been a crossroads since time began. About 100 million years ago it was a home for dinosaurs on the edge of an ancient sea, and dinosaur tracks and bones are found throughout the area. The most impressive collection of tracks is at Clayton Lake State Park, where over 500 tracks have been documented. This area is open to the public with an interpretive center and a boardwalk around the site. 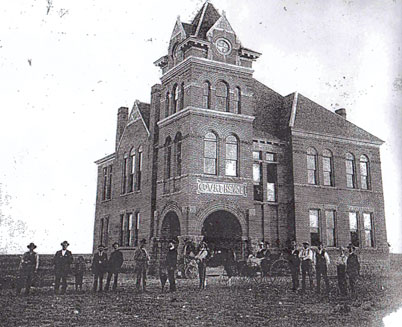 Native Americans began coming through the area at least 10,000 years ago. Many traces of their passing have been found including various types of pottery, spear points, and even human remains buried in caves. The area was rife with buffalo, deer, and antelope, which made it a prime hunting ground.

The twin peaks of Rabbit Ears Mountain have always been an important landmark to travelers and were particularly noted by Santa Fe Trail caravans which passed through the area from 1821 through the 1870s. The name Rabbit Ears was given to the volcanic outcroppings in honor of the Indian Chief Orejas de Conejo who was killed in battle with Spanish colonists in the early 1700s.
In the late 1880s talk of a railroad was heard and Stephen W. Dorsey, who had built a mansion at Mountain Spring about 60 miles west of Clayton, acquired access to the site where Clayton was eventually situated. A town site was laid out, named after Dorsey’s son Clayton, the railroad came right through the town, and the community began growing in leaps and bounds.

Clayton immediately became a shipping point for cattle and soon big herds were being trailed up from the southern part of the New Mexico territory. The area drew cattle and sheep ranchers and later, farmers. To this day the focus is on ranching and farming.

One of the early visitors to the area was Tom “Black Jack” Ketchum who first came to Clayton as a cowboy with the trail herds. He and his brother Sam later became outlaws and three times robbed the train near Folsom, west of Clayton. Tom was hung in Clayton in 1901 and is buried in the Clayton cemetery.

Morris Herzstein settled in Clayton in the 1890s and became a prominent merchant and rancher. His son Albert remembers a happy childhood in Clayton and contributed over a quarter of a million dollars to the Herzstein Memorial Museum making it one of the finest small museums to be found anywhere. The museum offers a glimpse of the American West. 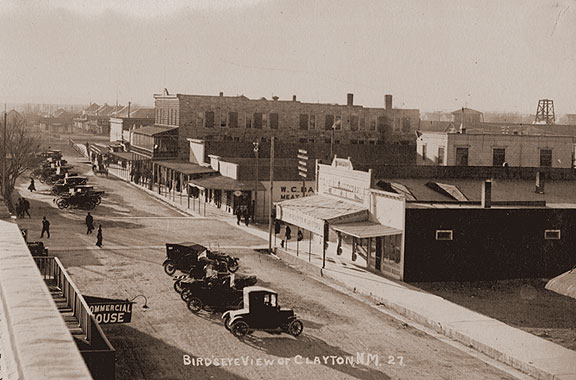 Other attractions in Clayton include: an excellent library featuring a large collection of western literature, a 9-hole golf course, and many green spaces for picnicking and relaxing. The Kiowa National Grassland northeast of town encourages a stroll along the Santa Fe Trail and enjoyment of the area’s flora and fauna. There are many locations near Clayton where visitors can hike or ride along the Santa Fe Trail Scenic Byway. In addition to dinosaur tracks, Clayton Lake State Park has excellent fishing, with picnic and camping facilities. Capulin Volcano National Monument has an informative visitor’s center and a view of five states from the top of the volcano.

Clayton has a number of shops featuring arts, crafts, collectibles, souvenirs and other interesting merchandise. For the traveler there are nine eating establishments, six motels, several convenience stores, and a full service campground.

We’re still a crossroads town; hope to see you soon.

TOP: Union County Courthouse. The county commissioners awarded the contract for the courthouse to John Hill, designer and builder from Las Vegas, New Mexico, for a bid of $18,000.00. The courthouse and jail were dedicated on December 8, 1894. The roof and portions of the upper story were blown away by a tornado on October 18, 1908.
BOTTOM: Bird’s eye view of Clayton, 1927

This article appeared on page 37 of HighCountry Magazine 2010.