Our fascination with movies begins when we are young, and for most never completely disappears. They transport us, they awe us, they inspire us and they linger somewhere in our subconscious, much after the final credits have faded. With the dramatic landscapes and seemingly unending abundance of light and sky, filmmakers have flocked to New Mexico, just as painters and photographers have. Recent special effects driven hits such as Transformers (2007), Thor (2011) and The Avengers (2012) have brought much publicity to the state as a cinematographer’s dream. The origins of the region’s filmmaking, though, were much humbler.

Generally considered as the first “movie” filmed in the American West, Indian Day School was made by none other than Thomas A. Edison in 1898, when New Mexico was still a territory. The short soundless clip depicts a group of school children in a Pueblo-style schoolhouse located at Isleta Pueblo, just south of Albuquerque. 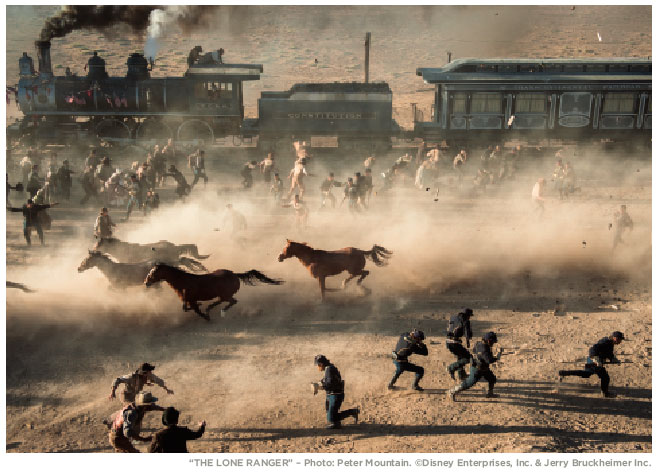 New Mexico’s untamed and majestic vistas paired with the brave souls who inhabited these wild lands, became the underlying theme for early filmmakers. The famed outlaw William Henry McCarty Jr., known also as Billy the Kid, would prove to be a perfect subject. The previously unknown gunman gained legitimate notoriety when New Mexico Governor Lew Wallace put a price on his head; the rest was the stuff of legends as well as movie making history. Billy the Kid (1930) was shot in Gallup; The Left-Handed Gun (1958) was filmed in Santa Fe with Paul Newman taking the lead, and finally Young Guns was shot in Cerrillos in 1988 with Emilio Estevez playing The Kid, this time filmed in full color.

With hundreds of movies filmed in New Mexico, the Western theme has not been replaced, but enhanced and expanded and now encompasses nearly all genres. The counter-culture motorcycle epic Easy Rider (1969) starring Peter Fonda, Dennis Hopper and Jack Nicholson contained scenes from Taos, and was said to be a generational touchstone. Other generations were touched by the likes of Red Dawn (1984) filmed primarily in Las Vegas and the controversial and violent road trip epic Natural Born Killers (1994) with its infamous wedding scene filmed on the Rio Grande Gorge Bridge near Taos.

New Mexico movies truly run the gamut in both genre and quality. Critically acclaimed films such as 21 Grams (2003), No Country for Old Men (2007), and True Grit (2010) continue to impress worldwide audiences; while MacGruber (2010) was but a dud. Certain movies simply needed to be made locally, such as The Milagro Beanfield War (1988), filmed in the quintessential Northern New Mexican community of Truchas. And occasionally there is a selection from one of Hollywood’s most feared categories – an outstanding book made into a rather poor movie; All the Pretty Horses (2000) nailed that one. 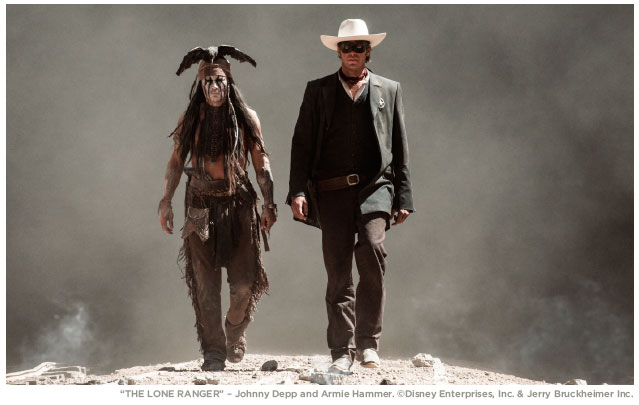 The latest movie to be filmed in New Mexico, as well as Colorado, Utah and California is The Lone Ranger. The Disney production stars Armie Hammer as the Lone Ranger. He is known primarily for his portrayal of both Winklevoss twins in David Fincher’s film The Social Network (2010) which chronicled the creation of Facebook. Hammer is overshadowed by one of modern film’s most successful cinematic trio: actor Johnny Depp, producer Jerry Bruckheimer and director Gore Verbinski. Restrained only by a gargantuan $250 million budget and a rumored release date of June 2013, the phrase “summer blockbuster” comes to mind.

Gregor “Gore” Verbinski started his film career with music videos of punk rockers before directing The Mexican (2001), The Ring (2002) and Rango (2011). He also directed the three Pirates of the Caribbean films.

Jerry Bruckheimer is un-deniably one of the most successful film producers of all time; his first big hit was the 1983 romantic drama Flash-dance. He made it successfully through the 80s with Beverly Hills Cop (1984) and Top Gun (1986); then survived the next decade with Bad Boys (1995), The Rock (1986), Con Air (1997), Enemy of the State (1998) and Armageddon (1998), before dabbling in television and producing the CSI: Crime Scene Investigation dramas and their spinoffs. TV did not slow Bruckheimer down as he continued to produce blockbusters such as Remember the Titans (2000), Gone in 60 Seconds (2000) Black Hawk Down (2001) and Pearl Harbor (2001) before producing The Pirates of the Caribbean films.

John Christopher “Johnny” Depp II may be the most recognizable actor of his generation. After working in television on the hit 80s series 21 Jump Street, he took several secondary roles in Nightmare on Elm Street (1984) and Platoon (1986) before starring in Tim Burton’s Edward Scissorhands (1990). His extensive film-ography is staggering and includes What’s Eating Gilbert Grape (1993), Fear and Loathing in Las Vegas (1998), Blow (2001), and Charlie and the Chocolate Factory (2005), and many, many others. He stars as Captain Jack Sparrow in The Pirates of the Caribbean films.

Depp will now portray Tonto, the Lone Ranger’s Native American sidekick in the upcoming film. Depp was recently adopted by LeDonna Harris, a member of the Comanche Nation during a ceremony in Albuquerque. He was given the Comanche name of “Mah Woo May,” which means shapes shifter and considers himself to be part Native American.

The small mountain community of Angel Fire was stunned for the month of August 2012 as hundreds of staff and tons of equipment set up camp to film scenes for The Lone Ranger. As far as Beatlemania was a real phenomenon and Bieber Fever exists, the Depp Effect transformed rational golfers, bikers and fishermen into awestruck and obsessed fans. The familiar small talk at the post office no longer centered around the monsoon rains and the geese on hole #9, but on the filming of The Lone Ranger. The locals became experts on all things Depp, and Johnny Depp sightings were as common as seeing marauding prairie dogs evading truck tires.

“No way, it must have been his stunt double. I hear Johnny Depp doesn’t smoke.”

“You are just plain crazy, Johnny Depp doesn’t have a double … Johnny Depp does ALL his own stunts.”
The Lone Ranger was a fictional former Texas Ranger, who wore a mask to disguise his identity and would fight injustice with his companion Tonto in the American West.

Whether this revival can be parleyed into cinematic money maker on the other hand, is up to the modern moviegoer to decide.