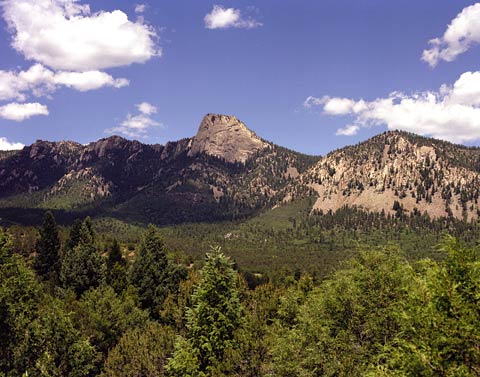 Webster’s Dictionary defines a landmark as “a prominent identifying feature of a landscape.” In the early days of the Southwest, trappers, traders, settlers, and soldiers used landforms to guide them across the vast deserts, mountains, and plains of the region. Whenever travelers met on the road, they exchanged descriptions of the landmarks they had passed for each other’s benefit in following respective trails.

In addition, American explorers who blazed trails over the uncharted wilds of the Southwest made extensive journal notes regarding the landmarks they passed detailing such things as elevations, distinctive shapes, and distances in between. The journals, once published, became required reading for emigrants planning trips to the frontier.

Alas, landmarks don’t hold the same importance for today’s travelers as they did in the horseback and wagon days. Instead, modern travelers use mile markers, road signs, and paved highways to guide them in their air-conditioned automobiles. Nonetheless, many motorists like to know the names of the landmarks that once guided Indians, conquistadors, explorers, trappers, traders, and cowboys and learn something of the events that occurred near them. It is a way of vicariously experiencing the life of their frontier predecessors.

In northeastern New Mexico many historic landmarks are observable from the highways that cross the region. Should one take a circle tour beginning at Clayton in the far corner of the state, the first viewable landmark is Rabbit Ear Mountain (6,058 ft.) which rises out of the plains northwest of town and can be seen by motorists headed either northwest toward Raton on US 64-87 or west to Springer on US 58. The unequal summits of the landform are remnants of a once active volcano. They get their name from a Cheyenne chief who was killed in a battle with Spanish soldiers nearby and whose remains are buried at the foot of the mountain. Although the “Rabbit Ears,” as they are known locally, was an important landmark guiding Native American travelers for centuries, they gained their greatest notoriety after traders following the Cimarron Cutoff route of the Santa Fe Trail used them to point their way in the 19th Century.

Continuing west out of Clayton on US 58, a range of low volcanic hills is visible several miles north of the highway about halfway to Springer. Known as the Don Carlos Hills after an early Spanish colonial military officer, they serve as the northern side of the Pasamonte, or pass through the mountains, that was a favorite stopping point for New Mexican hunters and traders traveling to the buffalo range of the Texas Panhandle in the 18th and 19th centuries.

On reaching the Colfax-Union County line, a rock formation known as Point of Rocks is also located north of the highway. This mound is one of four so called landmarks on the Santa Fe Trail (and the only one in New Mexico). It was a popular camping spot for traders freighting across the Cimarron Cutoff because of the cool, clear water that flowed from the perennial spring at its base. The site is notable in Trail history because it was near here that a wagon train led by J.M. White was ambushed by Jicarilla Apaches in the fall of 1849. In the attack Mr. White was killed and his wife and baby child were taken captive by the Indians. Later, the famed frontiersman Kit Carson led soldiers in an unsuccessful attempt to rescue Mrs. White and her child.

Once in Springer, NM 21 leads west out of town and eventually reaches the farming and ranching settlement of Miami which was named by its colonizers who hailed from Miami County of Ohio. The settlement is bounded on the south by two high mesas, Gonzalitos on the east and Rayado on the west. The saddle between the two is locally called Horse Thief Gap because of its presumed use as an escape route by horse rustlers during frontier times.

Traveling west out of Miami, NM 21 eventually turns northward and follows the route of the mountain branch of the Santa Fe Trail. The road passes a low lying mesa of the right that is named after Kit Carson who ranched with fellow frontiersman Lucien Maxwell several miles north on the Rayado River in the early 1850s. The Rayado settlement lies on the south side of the river that flows out of the mountains and still contains several structures of the Carson and Maxwell era. In addition, Carson’s adobe hacienda has been reconstructed and is now operated as a frontier museum by Philmont Scout Ranch.

Proceeding northward, the road passes through the Chicosa Hills, a series of low mounds that sheltered freight wagons and mail coaches as they made their way south out of Cimarron toward Las Vegas and Santa Fe. Before NM 21 reaches Philmont Scout Ranch headquarters, it drops into the Urraca Creek valley where motorists get a spectacular view of a long ridge topped by a massive rock formation known as the Tooth of Time (9,003 ft.). Even though “the Tooth” is the most significant Trail landmark in the area, the origin of its unusual name is unknown.

Traveling through Philmont’s headquarters and on to Cimarron, the tallest peak in Colfax County, Baldy Mountain (12,441 ft.) comes into view ranging twenty miles to the northwest. Both sides of the mountain were the scene of a thrilling, but short-lived gold rush that occurred in the late 1860s.

Passing through Cimarron and driving toward Raton on US 64, one can see two Santa Fe Trail landmarks visible in the northeast. Eagle Tail Mountain (7,761 ft.) is the multi-pointed summit on the left, while Tinaja Mountain (7,805 ft.) with its flat-topped summit is on the right. Traders named Tinaja for its resemblance to the narrow-necked pottery vessels by the same name once crafted by indigenous the Jicarilla Apaches.

Several miles southwest of Raton, Red River Peak is visible in the west rising above the surrounding plateau. It looms over the headquarters of the NRA Whittington Center and derives its name from the river that flows several miles to the northeast first called Red River by Spanish explorers. Today, the river that heads in the Sangre de Cristo Mountains along the New Mexico-Colorado border is known as the Canadian which comes from the Spanish, canada, meaning a valley with gently sloping sides. Some historians have theorized that the river got its name from a group of French Canadians who once trapped the area but little evidence exists to substantiate such a claim.

After arriving in Raton, the driver takes combined highway US 87-64 in a southeastwardly direction to begin the return trip to Clayton. Coming on the settlement of Capulin, the motorist can see Capulin Volcano (8,182 ft.) several miles to the north which is today a National Park Service monument. Geologists estimate that the cinder cone volcano was active seven to eight thousand years ago which was the same time archaeologists calculate that prehistoric Indians were in the vicinity hunting extinct elephants and bison. Visitors to the monument can hike a Park Service trail to the crater’s interior. Capulin is Spanish for chokecherry bush, a plant abundant both inside and outside of the volcano’s cone.

Continuing on to Des Moines, which was named by its founders after the town in Iowa, another extinct volcano comes into view southwest of the town. It is the immense Sierra Grande (8,720 ft.) that rises out of the plains at an elevation of 8,720 feet. Considered by geologists to be much older than Capulin, it is the highest volcano in New Mexico.

Once back in Clayton, the driver ends the tour of landmarks by once again passing the Rabbit Ears, this time on the right. The trip may not have been as strenuous as in frontier days, but hopefully the motorist will no longer view these same mountains and mesas as simply collections of rocks and boulders.

Steve Zimmer writes about western history from his ranch outside of Cimarron, NM. His most recent book is Cowboy Days: Stories of the New Mexico Range. Presently he is at work on a history of the New Mexico cattle frontier in the 1880s.

This article originally appeared on pp 30 of HighCountry Magazine 2007.