In charting a course for a future Memory Lane – paved with images, impressions, and travel-tread keepsakes – we offer you a gilded inventory, what you might call “the Blueprint Special,” which runs the recreational gamut in northern New Mexico and the southern Rockies. 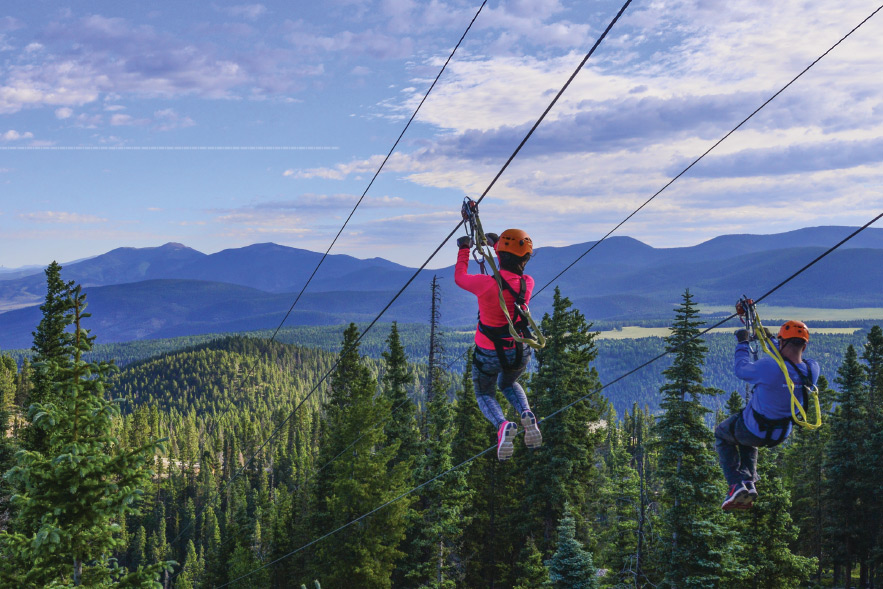 Switching Gears
Your personal scrapbook may include a snapshot of you in all your lung-inflated, muscle-pumped glory traversing a trail on two wheels. Angel Fire Bike Park, voted Best in the Southwest by MTBparks.com three years in a row, is the largest bike park in the Rockies and offers over 60 miles of top-notch terrain. Durango is a hotspot for singletrack-mountain-biking, and three of their most popular trails include: Horse Gulch (the easiest of the three), Dry Fork Loop (intermediate), and Hermosa Creek (an advanced, full-day trip).

A Bit of the Ol’ Bubbly
Summertime, when the rivers are frothing at the mouth and “rapid transit” is at its peak. Whitewater rafting is where Zen meets adrenaline, and liquid religion can be found on the Rio Grande (snaking through the Gorge in Taos), the Animas River (winding through Durango) and the Chama River. Experienced rafters may choose to take on the turbulent, Class V Rapids of the Upper Animas River, which wends through the gorgeous San Juan backcountry.

Track Record
William Faulker wrote that the “past is never dead, it’s not even past,” and the rumble of a steam-engine train in the 21st century is a testament to that claim. The Cumbres and Toltec Scenic Railroad, voted #1 American Train Ride in USA Today’s 2016 Reader’s Choice Awards, offers a 64-mile trip through steep canyons, high desert, and verdant meadows. Trains depart daily from Chama, NM, and Antonito, CO.

The Durango and Silverton Narrow Gauge Railroad (ranked #2 in the aforementioned USA Today poll) originally transported silver and gold ore from the San Juan Mountains, and has been in continuous operation since 1882. The gold and silver are long gone, yet a treasure trove of train’s-eye views remains part of the journey.

Art Crawl
Canyon Road, in Santa Fe, is a half-mile hotbed of artistic offerings and aesthetic pleasures. A summer-lovely stroll along the Road will acquaint you with over 100 galleries, artists’ studios, jewelry stores, clothing boutiques, home furnishings shops, and restaurants. When it comes to a family-friendly alternative art experience, Meow Wolf has become one of Santa Fe’s new-wave icons. Financially backed by Santa Fe resident and Game of Thrones author, George R.R. Martin, Meow Wolf has transformed a former bowling alley into an interactive wonderland, replete with its permanent installation, “The House of Eternal Return,” where an interdimensional Victorian house places you smack dab in the middle of a surreal, storybook adventure.

Taos, whose distinct character as an art colony continues to change and morph and evolve, has over 80 galleries and six museums, while the very town itself, with its artistically-bent legion of misfits, bohemians, raconteurs, and iconoclasts, is a Southwestern La Bohéme.

Throw Me A Line
New Mexico’s newest state park, Eagle Nest State Park (about 15 minutes north of Angel Fire) is home to Eagle Nest Lake, considered one of the best trout fisheries in the state. The Chama River, a tributary of the Rio Grande, which begins as a freestone stream in the mountains on the Colorado border, boasts not only the rugged splendors of sandstone canyons and other scenic marvels, but also plenty of wild browns and rainbow trout to keep anglers engaged. Other favorites are the Red River, Cimarron, and Rio Grande.

Loop to Loop
A perfect summer’s day sample-fest is cruising the 85-mile Enchanted Circle scenic byway, which flashes the region’s signature beauty—valleys, mesa, mountains, and forests—as you begin your circular odyssey in Taos, followed by Questa, Red River, Eagle Nest, Angel Fire, and back to Taos again. En route to Questa, you may want to pit-stop in San Cristobal and pay a visit to the D.H. Lawrence Ranch and Shrine, where the writer and his wife, Frieda, lived during the 1920s. The Ranch is only open Thursdays and Fridays, 10 am-2 pm.

Watering Holes
Those plucky, fever-brained pre-Colonial Spaniards, who did their share of tromping around the Southwest in search of gold and a time-inverting Fountain of Youth, did stumble upon magical and restorative mineral springs, which one explorer dubbed Ojo Caliente (“hot eye,” the idiom for “hot spring”). Today the Ojo Caliente Mineral Springs Resort and Spa offers eleven different pools, with four different types of mineral water—Lithia, Iron, Soda, and Arsenic—each bearing different health benefits.

Nestled within the San Juan Forest is Pagosa Springs, which is home to what has been called the largest and hottest mineral outflow in the world, the “Great Pagosah Hot Spring.” (Pagosah is the Southwestern Ute word for “healing waters.”) Pagosa offers three different bathing facilities from which to choose: Healing Waters Resort and Spa, Overlook Mineral Springs Spa, and The Springs Resort and Spa.

Take A Hike
Taos Ski Valley, while renowned for its world-class skiing, is also a hiker’s paradise, especially during the summer season. A diverse bounty of trees, such as Blue Spruce, Aspen, Western White Fir, Englemanns and Bristlecone Pine, reign supreme as the area’s organic monuments. Popular trails, with varying levels of difficulty, include: Williams Lake, Long Canyon/Bull of the Woods, Gavilan, Italianos, Manzanita, and Yerba Canyon. Then there’s the crown jewel, Wheeler Peak, a rigorous yet ultimately rewarding trek to the highest point in New Mexico at 13,161 feet, which offers an unparalleled panoramic view of the Sangre de Cristo mountains and the world below. You can also access the Wheeler zone from upper Red River Canyon.

Action Sequence
The fast-track way of experiencing high-altitude beauty is through Angel Fire’s Zipline Adventure tour, with six different ziplines grooving above the Moreno Valley. Ziplines range from 120 to 1,600 feet in length, with tours typically lasting two to three hours.

Lasting Value
When it comes to enduring tradition and historical richness, there is nothing quite like Taos Pueblo, one of the oldest continuously-inhabited communities in North America, and the only living Native American community designated both a World Heritage Site by UNESCO and a National Historic Landmark. It is speculated that the adobe buildings in the village were constructed between 1000 and 1450 A.D. The spirited celebration that is the Taos Pueblo Pow Wow takes place annually every second weekend in July, with different tribes from the U.S. and Canada engaging in Native dance competitions.

Mesa Verde National Park (about 35 miles west of Durango) is home to the cliff dwellings occupied by ancestral Pueblo peoples in the late 12th and 13th centuries. These time-tested architectural marvels bring a whole new meaning to the term, “the ol’ neighborhood.”

This article appeared in HighCountry 2017.