Want to add a little chill to your summertime travel plans? Here are five spine-tingling haunts of Northern New Mexico | by John Biscello –

The St. James Hotel (Cimarron): The Overlook Hotel from The Shining and The Bates Motel from Psycho have taught us, if nothing else, that not all lodgings guarantee a restful night’s sleep. The St. James Hotel, built in 1872 by Henri Lambert — and originally known as Lambert’s Inn — stands as a testament to some of the West’s wildest behavior. Reportedly, at least 26 people were killed within its adobe walls, and 22 bullet-holes in the dining room’s pressed-tin ceiling reflect the hotel’s shoot-em-up history. Owners, guests, and visiting psychics have all attested to the hotel’s supernatural activity. To begin with, there’s the menacing room 18. This room is always kept locked, because its alleged tenant is the foul-tempered ghost of Thomas James Wright. What exactly inspires Mr. Wright’s mean streak? Well, it could be that, after winning the rights to the hotel in a poker game, he was shot from behind while trying to enter his room — yep, #18 — and made it to his bed where he bled to death. Then there’s Room 17, where Henri Lambert’s second wife, Mary Elizabeth, who died in 1926, is often spotted, smelling of rose-scented perfume. And what would paranormal activity be without a mischief-maker? Known as “the Little Imp,” a dwarf-like old man is said to play pranks, laugh it up, and hide objects in the spirit of good, clean, after-life fun. The St. James Hotel is open year-round, and aside from its 13 historic rooms named after notables who stayed in them, a modern-style annex was added and features 10 more rooms.

The Mission of San Miguel (Santa Fe): Second sight and the echoes of a small child are the supernatural currents charging the Mission of San Miguel. Built around 1610 by the Tlaxcalan Indians of New Mexico, San Miguel is the oldest church in operation in the United States. One of its time-honored treasures, the 800 lb. San Jose Bell, is said to be the source of a miracle. In the mid-1800s a blind man would go to the church every day and pray — prayers that allegedly powered the ringing of the bell — and so long as the bell was ringing the blind man could see, but once the ringing stopped… darkness returned. When visiting the church’s gift shop, keep an eye and ear out for the child who died there, when it was a place of residence, in the 1940s. Directly across the street from the church is the oldest house in the United States (built in 1646), which is also said to contain its share of spooks and strange happenings. 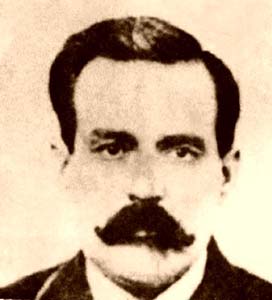 The Ghost of Black Jack Ketcham (Clayton): Clayton’s past possesses its own real-life version of a “Headless Horseman.” That is to say, when outlaw and train robber, Thomas “Black Jack” Ketcham was hanged on April 26, 1901 (Clayton’s first and only hanging), he wound up decapitated. That could be the reason why the ghost of Black Jack Ketcham rears his…uh, head…from time to time. One story, as reported by a boy scout camping with other scouts at the Philmont Scout Ranch, tells of the night he saw a cowboy — mostly solid, partially translucent, dressed in all black — appearing from behind some bushes. The cowboy remained oblivious to the boy, who, through a strange mist, heard voices followed by muffled gunfire. The cowboy, after being wounded in the shoulder, fired off six shots toward the trees, with the shell casings dropping onto the boy’s sleeping bag then disappearing. The next day, after awakening from his “dream,” the boy found six shell casings in the dust. When he and the scouts got back to base camp, he saw a photo, in an old saloon, of Black Jack Ketcham: the same cowboy he had seen the night previous. Black Jack Ketcham’s gravesite in Clayton remains a popular tourist attraction.

The “Guney” (Eagle Nest): Built in 1898, the Laguna Vista Saloon, or the “Guney,” has undergone various facelifts throughout the years, and was a hot-spot saloon in the 1920s and 30s when it was known as the El Monte. Located smack in the middle of town, the “Guney” holds its own in the spooks department. Its most popular apparitional resident: a woman forever living out her haunted honeymoon. As legend has it, the woman and her husband were staying at the hotel, on their ?honeymoon, and the husband went out hunting one day and never returned. Heartbroken and poverty-stricken, the woman became a saloon-girl in order to support herself, and to this day, she is seen at the hotel, in a dance-hall dress, hoping her lost hubby will return. Then there’s the ghost tinkling the ivories, as many guests and employees have heard the piano playing… sans a live pianist.

Grant Corner Inn B & B (Santa Fe): Bed, breakfast… and a sickly child’s eternal unrest? A few blocks from Santa Fe’s historic Plaza is the Grant Corner Inn B & B. It was built in 1905 by a couple new to the area, and their son, who was of ill health, required a great deal of care and attention. The father died, leaving the mother to tend to the boy (before she re-married an allegedly not-so-nice guy), and often when the mother was seeing to guests downstairs, the boy, in his upstairs room, would scream and pound the walls. The boy died young, and the mother and her husband moved away, yet somebody, or thing, stayed behind because neighbors frequently saw lights on in the boy’s bedroom, and heard noises coming from the “vacated” house. The Inn, now a charming, well-reputed B&B, is believed, by some, to have been exorcised of the boy’s sprit, yet there are others who swear that rooms 4 and 8, and the upstairs hallway, remain prime haunting spots, and that a grayish figure makes an obscure cameo in the hallways from time to time.