There are few main roads in this part of the state, so you wend your way along to the back ones along the river canyons ringed in shining snow-capped peaks, into forested valleys and up over the mountains to the grassy plains that stretch to the horizon. Along the way you’ll find that fibers arts are an integral part of New Mexico. Here, Native American fiber traditions are overlain and interwoven with Spanish, Mexican and Euro-American customs. A good place to start is at the Española Valley Fiber Arts Center. Supporting over 500 regional artists, the facility also offers a multitude of classes from traditional loom work to wool dyeing and felting. From there, move on to villages with names like Cundiyó, Chimayó, Dixon, Peñasco — each supporting their own set of amazing fiber artists. Up in Taos, La Lana Wools — one of many area fiber arts centers in the area — shows off stunning yarns and offers knitting and needle-felting workshops. From there follow the trail leads over to the artists in Mora where Tapetes de Lana inhabits a refurbished 200-year-old mercantile building. Head out on the plains to Las Vegas, Madrid and then La Cienega near Santa Fe. There are nearly two dozen local natural fiber centers in the north central portion of New Mexico, so take your time. 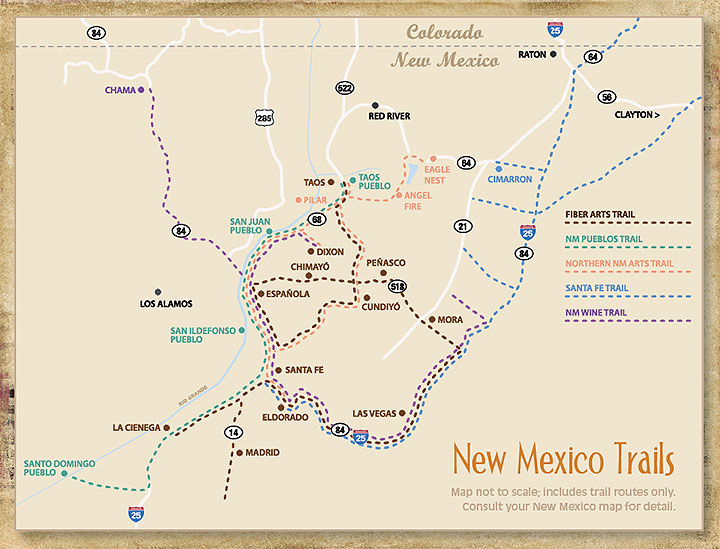 There are 19 Native American pueblos in New Mexico and most of them are located in the north-central portion of the state. In these villages old traditions are still maintained, including ritual dances and artistic craft work. Just north of the modern Town of Taos for example is Taos Pueblo, which has been continuously occupied for at least 1000 years. The picturesque San Juan Pueblo located 30 miles northwest of Santa Fe is noted for its skilled potters and woodcarvers as well as an art center and cooperative where visitors can view local artists and craftspeople working on jewelry and pottery. Further south right at the base of the Pajarito Plateau along the Rio Grande, San Ildefonso is best known for the amazing black-on-black pottery style that originated there. Santo Domingo Pueblo is located 30 miles southwest of Santa Fe and is one of the largest and most conservative of the New Mexico pueblos. The pueblo is well-known for its jewelry production and handicrafts as well as the great importance they place on their time-honored religious institutions and social structures. Although generally open to visitors please remember that you should not photograph or film inside the pueblos except with express permission.

There are few places where the arts are such an integral part of the land and culture as in northern New Mexico. Art venues, galleries, artist studios and workshops are scattered all up and down our fertile valleys and tucked down little alleyways in the adobe villages that dot the landscape. Thankfully, most of these creative entrepreneurs have joined together to get themselves on the map! Several arts tours take place throughout the years to help visitors and locals alike find the art that New Mexico has inspired. Tours start in May with the Eldorado Studio Tour near Santa Fe and run all the way through into the perfect days of fall. The Pilar Studio Tour in June calls itself the “jewel box of art tours.” This unique little artist community south of Taos sports some incredible painters and potters. The High Road Art Tour for example sees artists on the High Road to Taos open their studios and galleries for two consecutive weekends every autumn. The Taos Arts Organization likewise runs a tour for several weekends at the end of the summer. Over the mountain the Moreno Valley Arts Council runs tours up and down the valley from Eagle Nest to Angel Fire and all the little communities nearby. The Dixon Studio Tour wraps it all up in November with over fifty artists opening their doors.

Out east of the mountains on the Great Plains are the communities that were inspired by the Santa Fe Trail. This is the land where the expansive plains run up against the great mountains called the Sangre de Cristos. From about 1820 to 1860 the Santa Fe Trail brought America to the Southwest and in several places the deep ruts left by the literally millions of wagon wheels that passed over the prairie are still visible. This land is as open as you can imagine. Herds of pronghorn race along fence lines and past windmills that speak to a time when there were far more people on the plains than there are today. Out here where New Mexico flows into Texas and Oklahoma you’ll find the places like the Capulín Volcano National Monument and the ruins of Fort Union National Monument where American forces were posted to protect the traders on the trail. Las Vegas, one of the main stopping points on the trail, hosts a wealth of museums and an excellent national wildlife refuge. Just south of Las Vegas is the Pecos National Historic Park. To the north and against the mountains lie Cimarron and the St. James Hotel, once a hotbed of famous western outlaws such as Billy the Kid.

New Mexico isn’t quite famous internationally for its wines – yet. In fact, New Mexico has a very deep wine tradition and many of its modern wines are award-winning. So now, you’ve toured the pueblos, explored the eastern plains and seen all the art your cultured self can handle. It’s time to sit back and enjoy a glass. Wineries inhabit every corner of the state but it is in the north where the high altitude, crisp air and unique soils give the wines what can only be described as the taste of New Mexico. Just south of Taos you’ll find the Dixon-based wineries of Vivac and La Chiripada. A bit further south is the renowned Black Mesa operation as well as Estrella del Norte and Vino del Corazon. Out west of Taos near Chama are the Wines of San Juan. Each of these wineries offers tastings and tours. Many serve fine food and host music events. There are even several New Mexico companies who specialize in running tours of these wineries. There is just nothing quite like sitting back in a velvety vineyard, surrounded by the wind and water sculpted landscape and sipping at a glass of wine that tastes just like New Mexico.