Carving a place in history –

Whether celebrating the beneficence of San Francisco (St. Francis), petitioning San Ysidro for rain during a drought (St. Isidore), or honoring the virtues of Guadalupe, saints have been and remain an essential part of the spiritual and cultural fabric of Northern New Mexico and Southern Colorado. 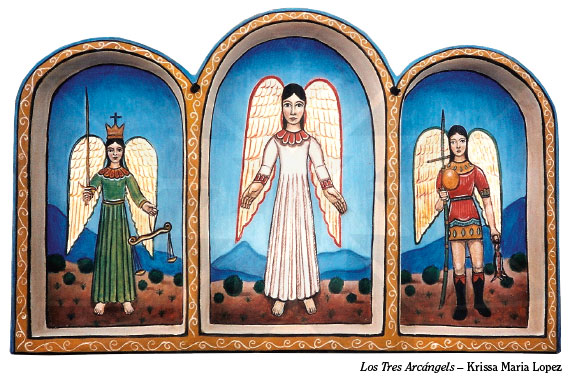 When Spanish settlers arrived in these parts in the 16th century, they brought with them the icons and images associated with their Roman Catholic faith, and planted the seeds which sprouted what author, artist and historian E. Boyd once declared “the most original folk art of the United States.”

Old-world values fused with a rugged regional flavor, and out of this union arose the “santos” (saints) that served a functional role in the lives of the villagers. This was not art for art’s sake, nor art as a commodity, but rather art born out of a spiritual hunger and sense of communion. The late 18th century to the late 19th century spans what is now considered the Golden Age or Classic Era of Hispanic-American devotional art.

This period remains the core foundation upon which later santeros and santeras (male and female saint-makers) built and extended a cultural legacy. Or as Dr. Charles Carillo—santero, historian and anthropologist—stated: “The formal art school is a thing of the past for New Mexico carvers. The historic santeros are the art school of the present.”

There are three forms that traditionally define Hispanic-American devotional art: Retablos, Bultos, and Reredos.  Retablos feature images painted upon rough-carved slabs of wood, which are coated with gesso (dried gypsum and rabbit-glue) and finished off with a varnish. Bultos are free-standing carved statues, and those which are designed to be dressed in costumes for ceremonial occasions, are known as vestir bultos. Two well-known vestirs are “La Conquistadora” in the St. Francis Church in Santa Fe, and “Our Lady of Guadalupe” in the San Geronimo Church on the Taos Pueblo.

During the Golden Age, santos became fixtures in the Spanish-Colonial churches, people’s homes, and the moradas—de-centralized meeting places of worship. The moradas were run by the Penitente Brotherhood, which played a prominent role in the religious life of the villagers, and remains an active confraternity today. Ascetic in nature, the Penitentes emphasize the Passion of Christ, and this is evident in what is known as the Penitente-style: graphic renderings of Christ’s crucifixion and sufferings. 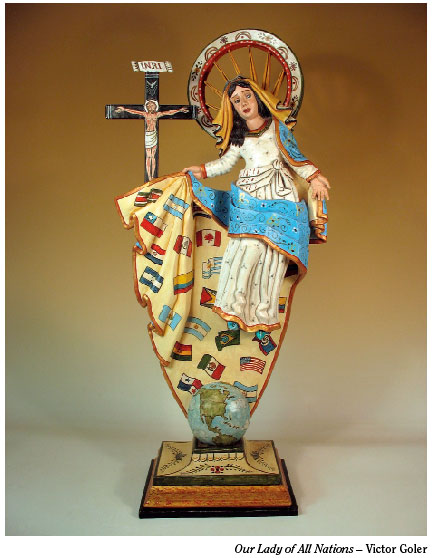 Another way in which the Catholic faithful of this region celebrate Passion Week is through a pilgrimage to El Santuario de Chimayo (the Sanctuary of Chimayo). The village of Chimayo, located between Taos and Santa Fe, is the site of this historic landmark church, which receives about 300,000 visitors per year and is revered for its “holy dirt.”

The santos, which constitute the celebrated legacy of the Golden Age, are all the handiwork of men. Or at least are credited as such, in that women often served unsung roles in the crafting of saints. Today, the same restrictions don’t apply, and there are many prominent santeras.

Humility was a key component in santos-making, and many santeros left their work unsigned. Two notable santeros who came to be identified through their region and their style—the Laguna Santero and the Arroyo Hondo Santero.

Some of the most revered names from that era include José Aragón, Pedro Antonio Fresquis, Juan Miguel Herrera, José Benito Ortega, Jose Rafael Aragón, and Molleno (the Chile Pepper Santero).

One of the primary factors which precipitated a period of decline in Hispanic-American devotional art was the advent of the Santa Fe Railway. Its arrival in Las Vegas in 1879 and Albuquerque in 1880 opened the floodgates for mass-produced merchandise. Cheap paper reproductions of devotional images and plaster-of-Paris saints began to colonize homes and churches. One-of-a-kind art was displaced by dime-a-dozen bric-a-brac.

In the early twentieth century, East-coast Anglos— particularly those with an artistic bent—began to insinuate themselves into the towns and villages of Northern New Mexico. Their exposure to both the Native-American and Hispanic-American art synonymous with this region basically set the stage for third party involvement (whether or not this involvement was welcome or desired is an altogether different and complicated matter). Artist and author Frank Applegate and author Mary Austin had been collectors of and advocates for traditional New Mexico art, and in 1925 they, along with several others, founded the Spanish Colonial Arts Society. The Society—whose mission is to collect, preserve and exhibit the Spanish Colonial art of New Mexico and beyond—has morphed and expanded during its 84-year history. One of its primary spin-offs is the now world-renowned Spanish Market, which takes place each July in Santa Fe (there is also a smaller Winter Market, this year taking place on Thanksgiving weekend). The hand-made work of hundreds of New Mexico artists is showcased and sold at this festive event.

One of the early twentieth century figures who would garner acclaim and draw the interest of collectors, was José Dolores Lopez. Hailing from Cordova, NM, his village would become the namesake for the style which was his trademark. The “Cordova style” refers to chip-carved, unpainted bultos, and is carried on by Lopez’s descendants.

Perhaps one of the most seminal and iconic figures in New Mexico art history is Patrocinio Barela (1900-1964). His canon of wood carvings runs the gamut from saintly to secular, abstract to representational, and he was both lauded and vilified for his innovative techniques within the form. He was adopted, if only in theory, by the modernists of the 1930s and ‘40s, and his elastic style drew comparisons to African sculpture work.

I am the tradition. But tradition is not copying. What I do to continue my heritage is to renew it, like a growing plant.   – Luis Tapia, santero

Tradition at its best is an anchor and vital force of continuity; at its worst, a proponent of static and decay. Many of the santeros and santeras working today have remained true to the heart of devotion, while extending boundaries and broadening the definition of religious art. This can be seen in the work of Luis Tapia, who has framed gang members and prostitutes within a spiritual context. He has asserted that there is “religious life in all activities” and that “rules tend to stagnate the culture.”

Then there’s the outsider folk art of Nicholas Herrera—the El Rito Santero—who has drawn not only from his religious background, but that of his rough-and-tumble environment to create subjectively charged works, in which you might find the Grim Reaper cruising in a low-rider and toting an automatic weapon. The social, political, and economic complexion of communities, and the world at large is being filtered through saint-making. Or, to borrow the words of santero José Raul Equibel: “It is the santero’s mission to re-sensitize.”

The contemporary renaissance of Hispanic-American devotional art, which gained traction in the ‘80s and ‘90s and has carried over into the 21st century, has translated into a wider platform and greater exposure for santeras and santeros.

Then there’s saint-making as a family tradition. Santera Krissa Maria Lopez—whose father, Felix Lopez, and brother, Joseph Lopez are also saint-makers—explains, “I come from a background in which my parents consider family, faith and education the most important components for a happy, meaningful and successful life… My father began carving santos in 1976 when very few people were doing it.

I was five years old at the time, so I grew up watching him and being around this type of art. As an adult, I took up retablo painting, while my brother Joseph became a carver like Dad. I draw inspiration from the historic retablos and bultos painted by the masters such as José Rafael Aragón, Pedro Antonio Fresquis, José Aragón, and others, but I paint in a more contemporary style, keeping in mind that they are first and foremost devotional works… I believe in innovation within the tradition, not not to the extent that one takes away its devotional aspect and turns it into an art piece in which its original intent is diminished.”

John Biscello is a Taos writer, playwright and teacher whose short story “Limb” was recently nominated for a Pushcart Prize.