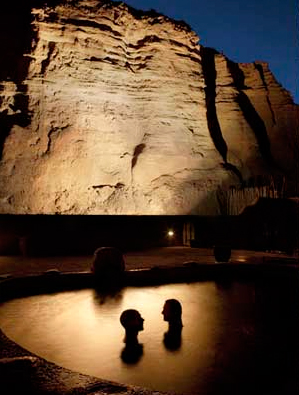 In the 1500s, the Spaniards, in their quest for gold and the Fountain of Youth, discovered these unusual mineral springs. One explorer’s record cites, “The greatest treasure that I found these people to possess are hot springs which burst out at the foot of a mountain… so powerful are the chemicals contained in this water that the inhabitants believe that they were given to them by their gods. These Springs I have named Ojo Caliente, or hot eye.”

Today, the healing waters embody the ideals of the modern spa. The word “spa” itself is an acronym for the Latin phrase “Salus Per Aquas,” which means “health through water.” Ojo’s unique waters and signature “Milagro (Miracle) Wrap”—a treatment that honors the Native American sweat ritual of purifying body, mind and soul— are just some of the reasons that Ojo attracts people from around the globe. But a long history of miracles distinguishes Ojo Caliente as a spa among spas.

The healing waters at the heart of Ojo are a marvel of geology: the sulphur-free, natural mineral springs originate from rain water and snow runoff collected in deep, underground aquifers. Volcanic pressures return the heated water through various rocks and soils that determine its mineral content. The combination of lithium, soda, iron and arsenic is found nowhere else in the world.

Historically, the mesa above Ojo Caliente was home to thousands of Tewa Indians and the people of Posi’ Oiunge who thrived in the 14th, 15th and 16th centuries.

In 1848, the United States took possession of New Mexico and Ojo Caliente was passed along as a Spanish Land Grant. The area came into the ownership of Antonio Joseph, a first-generation American who opened the Springs as a health spa in 1868.

Ojo Caliente still stands much as it did over a century ago and remains a sacred gathering place for health and wellness for Native Americans, New Mexicans and the thousands of guests who travel to the springs each year.

This article appeared on page 28 of HighCountry Magazine 2010.