Summer. Just the word makes spirits soar. Later, it’s back to the daily grind, but in the meantime, I figure a change of attitude (and altitude) might do a body good. Who knows? Fresh perspectives can change things forever. When I got the chance to take a hot air balloon ride (always on my bucket list) I jumped at the chance.

Aficionados consider the Taos venue one of a handful of the most stunning rides in the world, due to its unique configuration of forces. This goes back a few million years to when a nearby mountain, once higher than Everest, blew its stack and the earth split, forming the Rio Grande gorge. It’s the second deepest rift valley on the planet. What will it be like from the air? 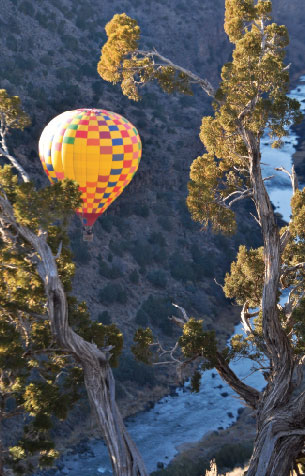 Oh, by the way. This is a life lesson too. In case you didn’t get the memo, control is illusory. Balloons are like that, too. They are like rudderless boats, slyly riding currents of wind. But they can maneuver up and down, too, meaning that a good pilot navigates skillfully via nature’s rules.

My alarm goes off at dawn. Soon I am bouncing in Eske’s Paradise Balloons company van past old adobes and alfalfa fields to the spectacular overlook at the confluence of the Rio Hondo and Rio Grande. The balloon (envelope) is rather like a large colorful party balloon, which you blow up, thankfully not with lungs but with giant fans. Hot air is added until Ken, our pilot yells, “Get in!” The four of us dive into the wicker basket and we are suddenly, weirdly transcendent. There is no one to sternly remind: “Buckle your seatbelts.”

The euphoria of levity leaves me jumping up and down until Ken, says drily, “It’s a good thing that trap door is holding.” The two other passengers, a ridiculously young and in love Utah couple, are here to celebrate their recent marriage. This is amazing because en route she confessed: “I’m afraid of heights.” Fortunately, Eske has a pretty good safety record. And like a good marriage, there is something paradoxically ecstatic and calming about a balloon ride.

We rise, silently and surely, interrupted intermittently by a noisy blast of hot air and the nonstop click of our cameras. We are following the sinuous Rio Grande below, until, yes, we enter the canyon and descend until we smell river water. We can actually touch it with the basket. Should have worn high waters.

But from back on high, I survey my personal kingdom. There are mountain sheep – five of them clambering on red canyon walls, and an eagle soaring for good measure. There’s my brave river, the Rio Grande, aka Rio Bravo, lined in brilliant green, flowing toward the Gulf of Mexico. My kingdom is domestic too: Below, a dented blue truck filled with wood bumps along, aluminum roofs flash in the sun as we pass over, and two people appear suddenly on horseback.

An hour or so later, the scent of earth and sage hail imminent landing. We bump gently once, then twice, but the wicker basket flexes like pseudo shock absorbers. The high-on-love couple are all smiles and hand-holding. Do they realize we all return to terra firma sooner or later or will they recall that love transcends everything? Or at least some things.

But for now, there’s champagne. It doesn’t have to be a balloon ride that turns everyday pleasures into ecstatic occasions. But it doesn’t hurt either. Golden bubbles rise in narrow crystal flutes. Or were they jelly jars? 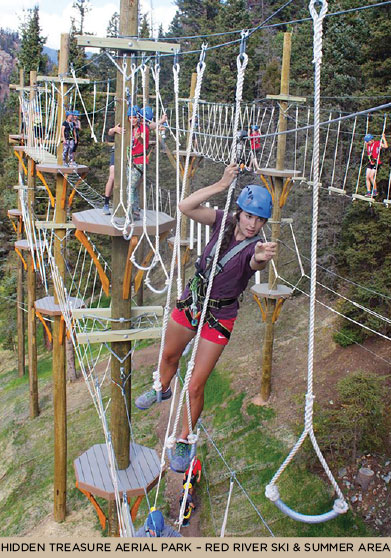 Next, I’m going to build character. Maybe the ropes course in Red River? They have three levels of courses, which enable practically anyone to do it (Waldorf school kids, their smallest clients, to tough ol’ Cannon Air Force Base cadets). Most are turistas. There are 25 different elements including a high beam, or a net where you can imitate Spiderman. Or navigate a four-cornered swing. Or scream down the 400-foot zipline 60 feet off the ground as a grand finale. Evan, who is 6’4” and 210 pounds, says that at his size you go really fast and I believe him.

UNM ski team coach John Downing uses it for their training, because it’s a bonding time. They also face their fears (like the downhill racer afraid of heights!). “They love it,” he says. Go Lobos, I’ve always said. But if you’re a simple-minded adrenaline junkie uninterested in personal development, take the Pioneer Flyer. It’s like a two-person chariot ride, which pulls you up backwards to the top of an impressive summit. Now take a big breath. A really big one. Then gravity sends you screaming back down over the fishponds to the bottom. More my speed is the slower summer chairlift ride. And on the top, you can get food and a glass of wine or just drink in the matchless views (free music on Saturdays.) 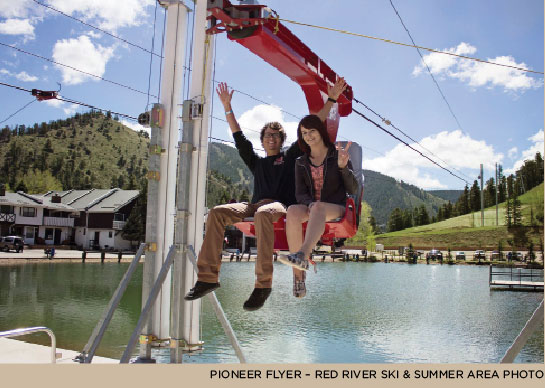 Another real zinger is the awe-inspiring Zipline Adventure Tour at Angel Fire overlooking the Moreno Valley. These tours take two to three hours, and the ziplines vary from 120 to 1,600 feet in length interspersed with short hikes. Dreamy Cassandra, a self-confessed addict, is heading out for the third time. “One morning it was foggy,” she says, “and gorgeous. It was like soaring through the clouds. You can see the whole valley as you zip across between two peaks.”

Like the ropes course, there’s training and coaching and safety gear. Everyone from corporate teams and Boy and Girl Scouts use it too. Be all that you can be, I always say. I only got childcare and good grooming badges when I was a Brownie.

My own favorite ride is at Taos Ski Valley. I miss these beautiful mountains where I teach skiing all winter. In summer I take the Kachina lift that runs upward from the 10,000-foot elevation Bavarian Lodge. Then I run down in a righteous but futile attempt to burn off the calories from the weiss beer and spaetzle my friend and I always order on the Bavarian sundeck (it’s authentic – I taught skiing in Bavaria, too). We discuss – intently and deeply – how all this fun has undoubtedly made us better people. Then we swap perspectives on local legends – including the cosmically gorgeous landscape photographs Chris Dahl-Bredine takes from his ultralight aircraft to the time Bad Boy Fred famously flew his plane under the Rio Grande Bridge – and the noses of the FAA. “To each their own,” she says, as we clink the heavy mugs. In Germany they say that beer enhances perspective.

— Michele Potter Ph.D. has lived in Taos for 19 years. In addition to writing, she renovates houses, teaches at UNM Taos, and is a ski instructor at Taos Ski Valley.