Sometimes I forget why we take these little cruises. The ones where you call a friend, throw a couple of cans of beans and a sleeping bag in the back of the truck and just leave. Just close the door on the ringing phone, turn on the engine and launch.

But the simple life can be complicated to achieve and that’s when I forget to remember why we go. Trail anxiety takes over the last 15 minutes, I fiend over details like film, sunblock, extra socks and what kind of layers. When all you really need is a cap and a canteen.

From our roost in Cimarron we were headed for Bandelier National Monument, one of New Mexico’s treasures, to see if the hiking was as good as we’d heard. Skirting around the Sangre de Cristos to stay with Ricardo in Santa Fe and then up to the monument, 14 miles south of Los Alamos, next morning. Start early, resist the siren song of Santa Fe: a slow Saturday morning in a good café drinking specialty coffee. A getaway is good every now and then; the right to move freely across New Mexico comes with citizenship, dropping in to the big metropolis to ransack restaurants and grocery stores, become reacculturated. 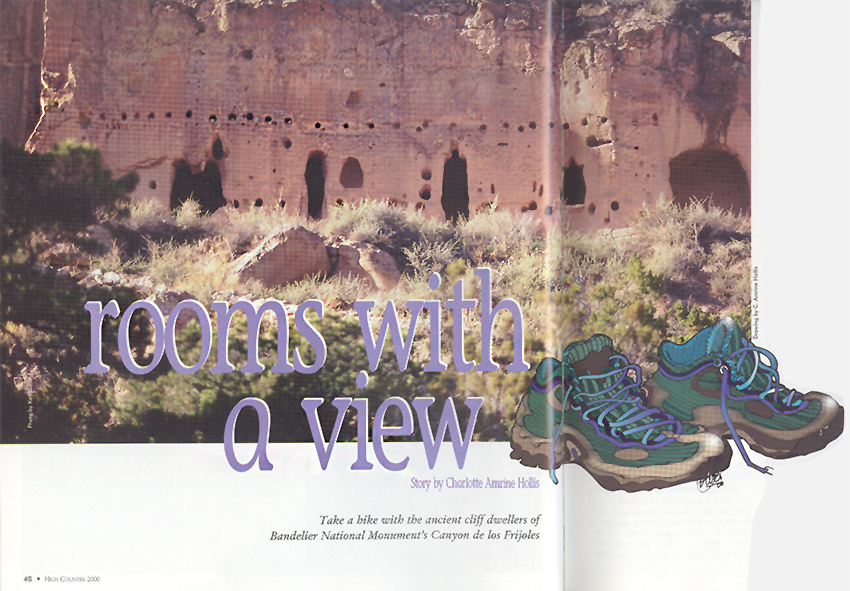 This particular mission will take us not just across the Sangre de Cristos and the Big River, but deep into the past of The Old People, the Anasazi, who made the journey centuries ago, needing to get away themselves, perahps. We’re visiting the home of our ancestors, getting back in touch with our roots. Even though our people come from somewhere else, we are, after all, New Mexicans too, and feel a kinship to anyone bold enough to make a life in this wild land.

And we’re suckers for a good hike. So, apparently, was Adolph Bandelier, a self-taught archaeologist from Switzerland who came to New Mexico Territory in 1880 and walked all over it, studying its languages and peoples. He was tireless, always afoot, carrying his aneroid barometer, surveying instruments and satchel of notes. He kept them faithfully and completely every night by campfire, under an overhang to keep out the rain or in a snowbank if necessary.

Led to the monument’s Frijoles Canyon by the Cochiti (KO-chuh-tee), whose ancestral home it was, Bandelier was the first scholar to explore and truly picture this point of prehistoric high culture to the rest of the world. In addition to his archaeological contributions, he wrote a novel called “The Delight Makers,” a combination of scientific observation and historic romance that offers a reconstruction of life as it must have been lived by the early Pueblo peoples. The ruins he examined so assiduously are still there, dug into the soft sandstone that forms the sides of the canyon and can be visited with ease from the Bandelier Visitors Center.

What a pity that we didn’t read all about it in the brochure until we drove away from the park late that afternoon. Drooling for the trail, we rip up the canyon right across the river from the ruins and miss them entirely, only seeing the cliff dwellings at a distance. Even so, they are a surprise. The population they represent was heavier than the settlement from that time period in the northern Sangres, the civilization better developed and richer in material culture.

Within the monument is the Bandelier Wilderness, 23,000 acres of backcountry including more than 70 miles of trails. Hikes range from moderate – up the canyon to the crossing or down past a waterfall to the Rio – to very strenuous up and over the mesa to the unexcavated Yapashi Ruins and way, way beyond. Just the thought of it makes our mouths water but we are unequipped for the long haul and select the Frijoles Canyon ride. Hiking by water is a rare treat.

We do about 12 miles round-trip. The Canyon is staggeringly beautiful, outlandish hoodoos and perpendicular slabs of red sandstone like a Cubist cathedral loom overhad. El Rito de los Frijoles, a jolly little stream still fat from snowmelt, keeps us company, stepping back from time to time to let us admire the scenery.

Our typical hikes are off-trail, backcountry trips into some extreme terrain where we never see another creature except for bears or elk. We don’t know what to expect from a place as well-attended as this one and are impressed. For a park as busy as Bandelier, it’s immaculately kept and obviously deeply respected, comfortable trails threading through woods that show no sign of human abuse. Like walking in a garden.

Although the monument lies back among the mesas and plateaus that line the Rio Grande, we don’t feel particularly remote. After all, this is a public park and a popular one. But it’s more than that. We are conscious of walking where The Old People walked. We don’t feel alone.

No wonder. Ancestral Pueblo peoples have lived here since 600 A.D. and were joined by Mesa Verde and Chacoan peoples from the west around 1200. As population began to deplete the area’s resources, they drifted down toward the Rio Grande where they established the pueblos they live in today.

There’s a feeling of companionship that comes with areas that have seen lengthy habitation. In this case it’s more like collusion; great minds with a single thought, sharing this place.

We hike up the canyon until the terrain begins to change, massive red walls fanning out and giving way to little meadows, ponderosas, rimrock. The trail, though it climbs steadily from the base area, never gets too radical and we make good time. We want to cover as much country as we can in the short time we have, get the feel of this new territory. I classify it the same way they do the Rio Grande, maybe Class 3 rapids – a good ride with enough challenges to stay awake, but easily maneuverable.

We picnic just below the crossing and discuss our next assault. There’s so much to experience here, too much for a day trip, and this place has backpacking written all over it. Spring and fall will be good times to ride the plateau, better than summer when heat could ricochet off the top like a raygun. Down here in the canyon there’s always the trickle of water and deep cool shadow, even with the sun’s high.

Perhaps a mile from the visitor’s center there is a ceremonial cave high up on the side of the lower canyon. We passed it on the way up, saw it alive with visitors and couldn’t think why. The signs say the cave is 140 feet above the trail and if you have heart trouble or fear of heights you should think twice about making the ascent. We certainly did. We’ve done rimrock with just first-knuckle strength that was more inviting. But it’s easier than it looks and the series of ladders and steps carved in the rock that gets you up there are sturdy. Just think a happy thought.

On top, within the wide sunny dome of the cave is a tiny, perfectly restored kiva. Dust devils whirl around us as we climb down into it. Late on a Saturday afternoon, the spirits of The Old People might be ready for a little peace and quiet.

They are patient with us.

Bandelier National Monument lies 14 miles south of Los Alamos via NM 501 and NM 4. From Santa Fe, drive north along US 285 and take the Los Alamos exit. From the north, take State Road 68 from Taos through Española and turn off onto NM 502 at the Los Alamos exit. No dogs are permitted. Overnight camping is limited to specific areas and may require reservations.

As we were going to press, the Cerro Grande wildfire swept Bandelier Monument for the second time in four years, ravaging Santa Fe National Park, the town of Los Alamos and portions of Santa Clara and San Ildefonso Pueblos. Here in the Enchanted Circle, more than 80 miles from the fire, the sky was filled with smoke and ash. The monument is scheduled to reopen, but visitors should call ahead for information: 505-672-3861.

This article appeared on page 48 of the 2000 issue of HighCountry magazine. Drawing by Charlotte Amrine Hollis.