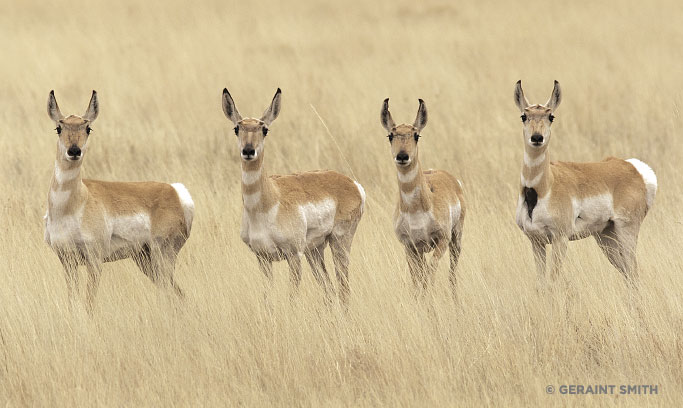 Seeing wildlife is like seeing celebrities, only better. – Tania Andrews

In the open-air, unscripted cinema that is Nature, one can discover an unparalleled richness of themes. Complex relationships, cyclical refrains and motifs, uncensored action sequences, love in all its guises—feral, playful, fierce, protective. In culling choice snapshots from an on location shoot in Northern New Mexico and the Southern Rockies, here’s what you might see: A tawny cougar, resting sedately on a snowdrift, its gaze laser-like and vigilant… an aerial shot of a Ferruginous hawk silhouetted against powder-blue sky… a bighorn sheep, sporting dense, Loki-like horns, poised on a butte… the lantern-eyed, tuft-eared Great Horned owl, perched like a mercenary on a cottonwood branch. What you may or may not encounter while exploring this region depends on where you’re looking, when you’re looking, how you’re looking, and of course “luck” (the chances of encountering a cougar are not only extremely slim but also may, depending on proximity and interpretation, be construed as “unlucky.”).

In a sense, they are low-profile “celebrities,” veering away from any kind of exposure, yet Black Bear, Cougar, Bobcat, and Coyote assume top billing as New Mexico’s large land predators. Despite their name, black bears come in various colors (covering shades of black, brown, red, blonde), with its most common color being cinnamon. With a diet mostly comprising plants, adult males can weigh up to 400 lbs (average weight being around 250), yet their girth belies their shyness, which is why they depend upon the subterfuge of trees and foliage in their forest habitats. Black bear was named New Mexico’s state animal in 1963, and among Pueblo tribes bears are considered one of the six directional guardians, associated with the west and the color blue. Black bears do not technically hibernate, but rather enter into state of “torpor,” and this modified spell of hibernation typically lasts from mid-October to the end of March.

When it comes to the name-game no one trumps the cougar. That is, the puma. Or the mountain lion. You could also say painter, panther, deer tiger, fire cat, mountain screamer, or catamount, and you wouldn’t be wrong. Puma concolor is a Guiness Book qualifier, with more names (over 40) than any other animal. Solitary, secretive, and crepuscular (primarily active during twilight hours), cougars are the only large cats that do not roar. They do purr, like housecats, and are also known to scream, squeak, hiss and whistle. Also solitary and crepuscular, with spotted patterns doubling as their cloak of invisibility, bobcats are the most common wildcat in North America. Bobcats in the Southwest have the lightest-colored coats of all North American bobcats, and are roughly twice the size of housecats. And these stubby-tailed felines are super-old-school, first appearing around 1.8 million years ago.

One of the animals that you are more likely to see in this area is Elk, or wapiti (“white rump”). These majestic and graceful creatures are one of North America’s largest land mammals, with a feisty mating ritual that includes posturing, bugling, and antler-jousting between suitors. One of the most popular places for elk-viewing is the Valle Vidal region of Carson National Forest.

Coyotes may be the most iconic of totem-animals when it comes to typifying high desert wildlife and lore. “Coyote” comes from the Spanish bastardization of the Nahuatl (Aztec) name, coyotl, with the earliest written reference to the animal appearing in Plantas y Animales de la Nueva España (1651), by naturalist Francisco Hernandez, who describes it as a “Spanish fox” or “jackal.” Regarded as the most vocal of wild North American mammals, the coyote’s audio-palette of howls, yips, and barks come in at least eleven different vocal styles. That variety also extends to their “role-playing” in Native American mythology, where Coyote may function as trickster, anti-hero, sage-teacher, or some combination thereof.

While the popular notion of buffalo thundering across the landscape in abundant herds belongs to a bygone era in American history, over 50,000 American bison call Vermejo Park Ranch (outside of Cimarron) home. Ted Turner, in his efforts as a conservationalist, owns the world’s largest private herd of American bison, and these shaggy hulks can sometimes be seen from Highway 64, between Cimarron and Raton. Also, the nearby Philmont Scout Ranch, a working cattle ranch, has a herd of over 140 bison. On May 9, 2016, President Obama signed the National Bison Legacy Act into law, officially making the American bison the national mammal of the United States.

Mule deer, named for their “mule-escent” ears, are broken into two sub-species: the Rocky Mountain mule deer and the desert mule deer. Another popular “hoofer” of the region, pronghorns, are often referred to as antelope, or the American antelope, though technically they are not antelope, with their closest living relatives being giraffes and okapi. Nimble and timorous, pronghorn are the fastest land animals in North America. Colorado’s state animal, Rocky Mountain bighorn sheep, has enjoyed a successful transplanting into the Rio Grande Gorge, where it has become common to see herds scrabbling along rocky ledges.

This region is also a feather-lover’s heaven, with hundreds of different bird species calling the area home, or in some cases a rendezvous point for the mating game. Wrens, owls, hawks, eagles, egrets, cranes, herons, woodpeckers, roadrunners, finches, jays, crows, ravens, starlings, warblers, cardinals, grosbeaks, and countless other classes present a stirring diversity of sounds, songs, colors, and flight patterns. The Monte Vista Wildlife National Refuge, just outside of Alamosa, is a springtime migratory stop-over for greater sandhill cranes, with over 20,000 passing through.

— John Biscello has lived in Taos since 2001. He is the author of two novels—Broken Land, A Brooklyn Tale and Raking the Dust—plus a collection of stories, Freeze Tag.