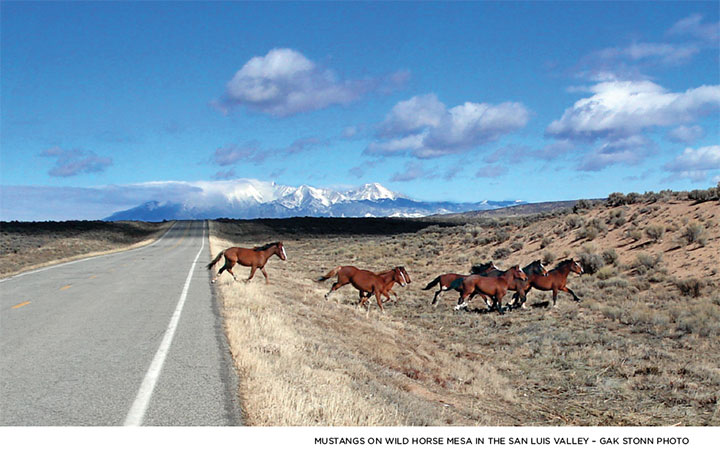 STRAIGHT FROM the HORSE’S MOUTH:
There is no shortage of myths, superstitions, and fun obscure facts when it comes to horses. From the vaults of equestrian trivia:

They have become symbolic extensions of the Southwestern landscape, four-legged representatives of grace, thunder, freedom, and majesty. Horses of varying breeds have starred as romantic icons in the Wild West chapter of the American saga, and without them the fierce and independent spirit of Frontier-Tough, U.S.A, would have been an altogether different story.

Yet the “Americanization” of horses is a complex tale of adoption, intrigue, and globe-spanning roots. In traveling way back to a time before America was America, and before horses were horses, or to spin a little Mr. Ed remix: “A horse is a horse, of course, of course,” except when a horse is… a hyrocatherium. Also known as the “dawn horse,” these were the smaller, multi-toed ancestral kin of modern-day horses, the first shoot in a multi-branched lineage. Before prehistoric horses went extinct in North America approximately 20,000 years ago, many had migrated via the land-bridge that once existed (connecting Alaska to Siberia), and came to thrive and flourish in the grasslands of Central Asia. A time-compressed hop, skip and jump later – horses occupying both Asia and Europe – and it was in the 1500s, with Spanish settlers and conquistadors impacting their presence in the New World, that the horse’s evolutionary homecoming took place.

Here’s what is considered the marked turning point of the Native people’s assimilation of “big dogs” (how Natives initially referred to the Spanish horses) into their culture:

“Only in 1680, when Pueblo Indians rose up and overwhelmed their Spanish overlords and drove them out of northern New Mexico for a dozen years, did Indians gain access to the Spanish herds. Once they did, horses and the horse culture expanded at a breathtaking pace… By 1700 the tribes of the Great Basin had them, and thirty years later those of the northern Rocky Mountains. By around 1780… the spread of horse culture across the West was complete, and peoples from the Columbia River basin to the Great Plains were reshaping their lives and redreaming their futures according to its promises.” – Elliot West, The Impact of Horse Culture

Horses revolutionized numerous aspects of Native culture – hunting, trading, warfare – and while the “golden age of man-and-horse” mythically transposed into a singular entity lasted just a little over a century, the notion remains a dust-encrusted valentine to the Old West.

While the domestication of horses is achievable due to their innate wiring to accept leadership, there are the wild ones, the thunder-hearted mustangs, some of which continue to occupy stretches of New Mexico and Colorado. “Wild horses,” the commonly used term, is slightly misleading, in that mustangs derive from the domesticated horses of yesteryear who escaped into the wild. Technically, they are classified as “feral horses.” (The only truly “wild horse” in the world, one which has never been domesticated, is the rare and endangered Prezewalski’s horse, native to Mongolia.)

That said, the mustang is the rogue spirit of the Western landscape, the James Dean of equestrian lore. While the Wild Free-Roaming Horses and Burro Act of 1971, which was instituted to protect and manage “unbranded and unclaimed horses and burros on public lands in the United States” has helped in the preservation of mustangs, many continue, through ambiguous sales, theft, or neglect, to become prey to the slaughterhouse.

Judy Barnes, photographer and mustang advocate, is the caretaker of Wild Horse Mesa, located in Southern Colorado (just outside San Luis) along the border with New Mexico. The mesa comprises 26,000 acres of private land, and is home to approximately 130 wild horses. After moving in with the horses ten years ago, Judy founded the non-profit Spirit Of The Wild Horse, whose mission revolves around safeguarding and awareness. “Wild horses are a large part of our history and should be protected and preserved for futures generations to enjoy,” Judy said. “We would not be the civilization that we have become if it had not been for the horse. Horses taken from the wild have pulled wagon trains, carried the pony express and were there for the military fighting for our country.” Expansion is also on the horizon, which would provide visitors with an organic glimpse into the world we share with our feral companions: “We are applying for a grant to fund the campground at the Rio Grande Wild Horse Preserve. The primitive campground will be open to the public to observe the wild horses, deer, elk and birds that are part of the habitat by the river. There are around 200 Spanish horses that have lived in the Brownie Hills for generations.” Judy has been closely studying and documenting the behavior of wild horses for the past ten years, which she will eventually publish. “I have always loved wild horses,” she said. “Sitting with a band of wild horses that have the freedom to come and go as they please is inspiring and healing… They heal the mind, body and soul.” For more, visit www.spiritofthewildhorse.com

Additionally, among the many roles horses have played in their relationship with humans, “healer” can be counted among them, with equine-assisted therapy (EAT) having been used to facilitate recovery from trauma, abuse, addiction, PTSD, and other challenges.