The Colorado-New Mexico border area offers a stunning array of federally designated wilderness areas for all your tramping needs. 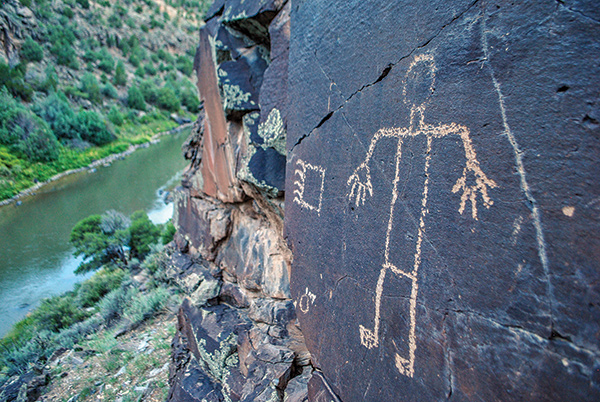 I’ve often heard it said that when God takes a vacation, She goes to Colorado. But I ran into Her on the trail one fine summer day when the Canadian violets were popping flowers all along the stream beds and their heart-shaped leaves were flush with green and God told me that in fact – and to be specific – it was the Colorado and New Mexico border area She targets for vacations.

“Wilderness,” She said and danced down the trail through the blue and red columbines, scarlet penstemons, yellow parsley and countless other flowers dressing the mountainside.

Well. That must be why they call this God’s Country, then.

Between Santa Fe on the south end and Salida on the north, there are no fewer than 14 designated wilderness areas covering around a million and a half acres of publically-owned land. And that is not to mention stunning places like the Rio Grande del Norte National Monument, the Valle Vidal unit of the Carson National Forest and the Great Sand Dunes National Park and Preserve, among others. There is no place like the Colorado-New Mexico border lands for bumming around on vast and awe-
inspiring chunks of lands owned by all Americans.

The 1964 Wilderness Act is one of the crowning achievements of our nation. Ours was the very first nation to codify the concept of wilderness legally. Many other nations, inspired by our leadership, have followed with their own Wilderness laws.

Freedom is at the core of the American wilderness ideal – which is presumably why God vacations in our wild lands. The Wilderness Act itself defines wilderness as “untrammeled.” That is not, as many people think, “untrampeled” as in never having seen human activity, because of course that is impossible. Native Americans roamed and utilized these lands for tens of millennia before the United States was born. Instead, untrammeled means free. To trammel something means to tie it down or restrain it. So as untrammeled lands, American wilderness areas are the epitome of freedom.

Just northeast of Taos lies the brand-spanking new Columbine-Hondo Wilderness Area, one of the more rugged roadless areas in the Southern Rockies. Driven upwards about 20 million years ago, the Columbine-Hondo is the headwaters of both the Red River and the Rio Hondo, both tributaries to the Rio Grande to the west. Rising up from the surrounding dry sagebrush flats this area is surprisingly lush with deep dark pine and spruce forests full of wildflowers and roiling creeks that rise from high altitude alpine meadows. The Columbine-Hondo is also home to a wide range of wildlife, from bighorn sheep to mountain lions to bear, deer, elk and more.

The Columbine-Hondo is a centerpiece of a wilderness complex, with the Wheeler Peak Wilderness on its south end and the Latir Peak Wilderness just to the north. From Gold Hill, the highest point in the Columbine-Hondo, the Valle Vidal area lies to the north. While not a designated wilderness, the Valle Vidal is largely roadless and generally managed as wilderness. Straddling both sides of the Sangre de Cristo, the Valley of Life, as it is known, hosts an impressive diversity of ecosystems and wildlife.

You can take a multi-day backpack in the Pecos Wilderness just north of Santa Fe and walk for days without seeing another human being. How about a climb up Wheeler Peak, the highest point in New Mexico, or a fishing trip into the Cruces Basin Wilderness? You can raft the Chama Canyon but don’t miss a hike or horseback ride in the wild grasslands on the mesas that overhang the river.

On the Colorado side, the Spanish Peaks Wilderness near Walsenburg protects two massive, long-dormant volcanoes that stick out in the Great Plains. From the top of the 13,000 foot peaks you can see a wagon wheel design of volcanic walls or dikes that jut from the forest below. The Sangre de Cristo Wilderness just to the west is Colorado’s third largest wilderness. In contrast to most of Colorado’s mountains, this rugged range was uplifted quickly in gargantuan blocks of stone that created stunning vertical changes in very short distances. Careful with your neck when you have to look straight up! Four of Colorado’s 14,000–plus ft. peaks are crowded in to the Sangres while at its base sits the Great Sand Dunes Wilderness Area, hosting rolling dunes made up of sand from an ancient sea bed.

You see, you really can’t go wrong. Running both sides of the Continental Divide is Colorado’s largest wilderness area, the Weminuche. South of that, near Pagosa Springs, the South San Juan Wilderness was home to the last known grizzly bear in Colorado, shot in 1979.

There is no place you will find on the planet that is devoid of human impact but in wilderness the freedom of the land dominates. Clean air, fresh wildlife, healthy ecosystems…that is what you will find when you cross the threshold to wilderness.

In the Colorado-New Mexico border- lands more than a million and a half acres with thousands of miles of hiking trails and endless opportunity for
adventure awaits the wilderness bum.

And God, who is apparently very big on wilderness.

Author and photographer Jim O’Donnell calls Taos home. His wanderings have taken him to over 40 countries on five continents and are to blame for the five languages he is sure he can stumble through. O’Donnell is the author of Notes For The Aurora Society.